Scientists have baked up their own artificial leaf fossils to answer a long-standing puzzle concerning the chemical formation of kerogen, a precursor to fossil fuels.

The researchers knew that leaf fossils up to a hundred million years old contain long chain aliphatic molecules1, which are components of some types of kerogen. This garbage-bin of surviving insoluble organic matter, coming from preserved algae, plants, insects and fish, is compressed and heated within the Earth to form components of fossil fuels like petrol or coal. 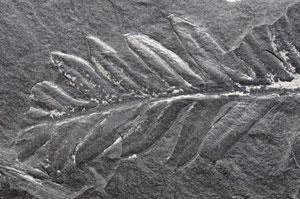 Yours in a day, if you can’t wait a hundred million years

Exactly how a modern leaf avoids rotting, and alters its chemical make-up to be preserved as such a kerogen-like fossil is a subject of some controversy

The popular hypothesis is that leaves contain some decay-resistant long-chain molecules, which survive as all else is rotted away. This, said team member Derek Briggs, of Yale University, Connecticut, US, was based on research into a type of cactus that contained cutan, a resistant hydrocarbon polymer. But the team could find no trace of cutan in other modern plants2. Alternatively, the researchers hypothesised that a chemical reaction with external sediment might be responsible, or that some other leaf component altered to form the aliphatic molecules.

To find out, Briggs’ team cooked up plant fossils in a laboratory oven. They baked powdered plant tissues and leaves at 350?C and 700 atmospheres pressure in sealed gold capsules for a day. This established maturation process is a speeded-up version of the kind of fossilisation that might occur in nature, said Briggs. If the same method is followed at a lower temperature, for example, leaves undergo a partial transformation, appearing rather like those extracted from younger rocks.

The artificially-created fossils did indeed contain long-chain aliphatic molecules, much like those found in real fossils3. Briggs and colleagues concluded that the lipids in leaf tissue were responsible for the transformation, probably by a polymerisation process, because when leaves that had their waxy lipid layers removed were baked, no long-chain molecules were found.

As the researchers have already found, lipids are also responsible for the long-chain molecules found in arthropod fossils, which also contribute to kerogen4. But, conceded Briggs, though oil companies are interested in sources of petroleum, exactly how the initial chemistry works is seen more as pure science, left to the enjoyment of researchers.