Wild chilli plants produce spicy chemicals in their fruit in order to deter fungal invaders, US researchers have shown.

A ’hot’ chilli pepper is packed with capsaicinoids: antimicrobial compounds responsible for the chilli’s characteristic burning sensation. They’re just one example of the various pungent, bitter, or even toxic chemicals found in many types of fruits - probably evolved by plants to ward off unwanted predators such as microbes. Such an advantage would outweigh the chemicals’ effects on animals that eat fruit to spread its seeds, goes the hypothesis.

But as Joshua Tewksbury, of the University of Washington, Seattle, explains, this intuitive idea hadn’t been backed up by evidence that microbial consumers affect fruit chemistry in wild plants. Tewksbury and coworkers, together with colleagues in Florida and Bolivia, tracked wild chilli plants, Capsicum chacoense, in a 200-mile region across Bolivia. These plants are susceptible to a fungus, transmitted by bugs that poke holes in the pepper fruit to feed, leaving scars that turn black as the fungus invades. Yet as Tewksbury’s team had previously discovered, the plants vary in their production of capsaicinoids, due to genetic differences. 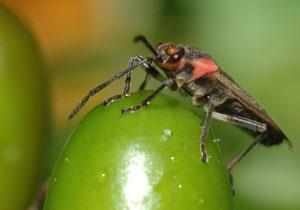 The researchers found that chilli plants growing in areas with the greatest abundance of foraging bugs - and therefore the greatest susceptibility to fungal attack - tended almost exclusively to be hot varieties. And peppers with comparable numbers of bug bite scars suffered less from fungal attack if they were pungent, than if they were mild. A final laboratory-controlled experiment using artificial fruit loaded with capsaicinoids, showed that the spicy chemicals are likely directly responsible for inhibiting fungal growth.

Paul Bosland, the director of the Chile Pepper Institute at New Mexico State University, welcomes the research. ’We have known that chilli peppers are anti-bacterial and anti-fungal, which may have been the reason humans began to consume them. Tewksbury and his colleagues have done beautiful research to demonstrate that in nature the chilli pepper’s heat (capsaicinoids) protects the fruit from fungal invasion. So not only have humans benefited from the capsaicinoids, but it has direct benefit to the chilli pepper plant,’ he says.

Like fungi, most mammals are repelled by chillis, unless they acquire a taste for the hot stuff. Birds, however, which spread chilli seeds, don’t have any receptors for capsaicinoids. Tewksbury’s earlier work, on chilli plants in Arizona, suggested that the chemicals evolved in order to favour attack by birds and discourage mammalian predators. He believes that the findings from Bolivia, likely the ancestral home of the plants, are more fundamental to their evolution. ’It is likely that the advantage gained from reducing fungal attack came before the advantage gained by reducing mammalian consumption, simply due to the ubiquitous nature of fungal fruit pathogens and the fact that they have been around a lot longer than mammals,’ he says