US chemists have peered into the depths of HDL

US chemists have peered into the depths of HDL, the so-called ’good cholesterol’ which protects against heart disease, to explain why it can become harmful. The research may also suggest an explanation for the near-billion-dollar failure of Pfizer’s blockbuster heart drug, torcetrapib, in recent clinical trials: it may have raised levels of dysfunctional HDL.

HDL (high density lipoprotein) particles are tightly-packed bundles of proteins which bind to cholesterol, carrying it away from artery walls to be disposed of by the liver. High levels of HDL usually protect against clogged arteries. As researchers have discovered over the last few years, though, that’s not always true: boosting HDL levels may be less important than making sure it contains the right proteins.

In research presented to the meeting of the American Chemical Society in Boston on 22 August, Jay Heinecke of the University of Washington, Seattle, described the most detailed analysis so far of HDL’s protein cargo.1 Heinecke’s team used 2D liquid chromatography-mass spectrometry (LC-MS) to pick out 48 proteins in HDL, discovering 13 not previously known to exist in the particle. Of the HDL proteins, 22 were involved in cholesterol metabolism, and 23 in the inflammatory response. That, said Heinecke, supports the idea that HDL doesn’t just prevent cholesterol build-up; it also stops artery plaques from rupturing and causing heart attacks.

But the HDL of patients with heart disease looks different, the researchers found. Previous studies have shown that such HDL is often dysfunctional: it doesn’t carry away cholesterol and even promotes artery rupture. But Heinecke’s analytical technique allowed him to pick out some changes in protein composition that may have turned good HDL into bad. One protein, ApoE, seemed to be particularly abundant in bad HDL, suggesting it might be used as a tell-tale sign of heart disease risk.

Stanley Hazen, section head of preventative cardiology at the Cleveland Clinic, Ohio, agrees that it is key to find some chemical footprint of HDL quality, rather than just counting HDL levels. This month, his own team published research explaining why HDL turns bad.2 One key protein, Apo A-1, helps the growing HDL particle to capture and bury cholesterol from artery walls, Hazen said. But as Apo A-1 curls around nascent HDL particles, in a structure resembling a solar flare, amino acids in the loop are exposed, making them vulnerable to oxidation that damages the HDL particle’s workings. How, or whether, this mechanism explains the changes Heinecke found in bad HDL’s protein composition isn’t yet clear. 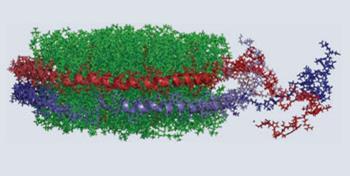 Apo A-1 chains wrapped around a nascent HDL particle

Studies like these are shedding light on the catastrophe of Pfizer’s torcetrapib, whose Phase III clinical trials were halted in December after it increased blood pressure and the risk of death or heart failure. As a study led by Steve Nissen from the Cleveland Clinic, Ohio, showed earlier this year, the therapy did raise HDL levels - yet didn’t cut down artery plaque.3 ’We believe the drug generated dysfunctional HDL that couldn’t move cholesterol away,’ said Heinecke. The results of Pfizer’s own analysis are keenly awaited.

Competing treatments don’t all raise HDL particle levels - instead, they focus on particular proteins, such as Apo A-1. ’Apo A-1 is the new HDL,’ said Prediman Shah, director of cardiology and atherosclerosis at the Cedars-Sinai Medical Center in Los Angeles. He pointed to three new approaches in the pipeline: increasing Apo A-1’s synthesis in the intestine, as biotech company Resverlogix hope to do; making artificial proteins that simulate Apo A-1, such as an 18-amino acid peptide D-4F currently being developed by Novartis; and infusing Apo A-1 variants into humans via gene therapy. This latter approach is being pursued by Pfizer using an Apo A-1 mutant found in a few Italians, who had low HDL levels but didn’t suffer cardiovascular problems.

At the moment, the most effective way to raise HDL pharmaceutically is by taking niacin supplements, said Shah; Merck are hoping to tweak the vitamin to provide a therapy without the usual hot flush side-effects. But as Shah concluded, ’When we try to simplify complex biology, there will always be some surprises.’ Lifestyle changes - weight loss, stopping smoking, and exercise - are still the best way to keep good HDL high.

Interested? Spread the word using ’tools’ menu on the left.