A new theory for how ’handedness’ in organic molecules evolved has been proposed by Dutch scientists. The researchers show that single-handedness in amino acids could have evolved under the influence of circularly polarised light, like that emitted by regions of the Universe where stars form.

Amino acids in nature are primarily of one chiral form - left-handed. The reasons for this have been hotly debated for many years. Now a new study, by Elias Vlieg at Radboud University Nijmegen in the Netherlands and colleagues, suggests that the tiny, almost undetectable effects of circularly polarised light could have been amplified over evolutionary timescales.

Circularly polarised light has, itself, a handedness (r-CPL or l-CPL) and therefore using light rotated in opposite directions changes the outcome.  ’We found that we could steer the whole system in one direction, or by reversing the light handedness, we could steer the system in the other direction,’ says Vlieg. ’What we have shown is that this is a perfectly plausible scenario for prebiotic mixtures.’ They ended up with almost pure solid products - 99.9 per cent of a single chiral form. 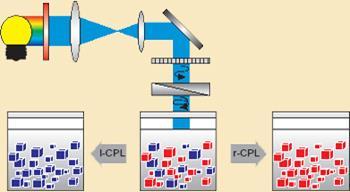 Vlieg’s team used an amino acid derivative, dubbed imine 1, to test their theory. They started by shining r- or l- circularly polarised light on a mixture containing both left- and right-handed forms for around three days. This, they propose, produced small amounts of unknown chiral ’photoproducts’, which inhibited the growth of crystals in one direction during the amplification step - the subsequent grinding of the mixture for five days. The grinding step, says Vlieg, speeds up the process that would have occurred over millions of years during evolution.

’The effect of circularly polarised light to cause some chiral excesses in amino acids is well known, and published long ago,’ says Ronald Breslow, who studies chirality in amino acids at Columbia University, New York. ’The amplification is novel but curious.’ However, he suggests that the team have ignored important work by other authors - Breslow’s own team, for instance, theorised last year that small chiral excesses of compounds brought to Earth by meteorites could have pushed life in one direction.

’People discuss all kinds of scenarios in this debate,’ says Vlieg. ’We are not claiming that this is the origin of the homochirality of life, but it is a contribution to that discussion.’ He adds that his team have plans for further experiments using molecules with greater relevance for the origins of life, such as real amino acids - rather than derivatives - and simpler molecules that might have been present in primordial soup pools.