How to strengthen the taste of umami

US scientists say they have uncovered a unique mechanism by which molecules drastically enhance umami flavour - the savoury taste associated with protein-rich foods such as meat, cheese and seafood. They think their work will lead not just to new flavour enhancers, but also to drug candidates that interact with receptors using similar allosteric mechanisms.

The umami taste is a response to L-glutamate, but other molecules, such as the ribonucleotide inosine monophosphate (IMP), can increase our ability to detect it. Researchers at Senomyx, a California-based company that develops novel flavours, identified the binding sites for glutamate and IMP on the umami receptor, a G protein-coupled receptor (GPCR). Both molecules bind to a structure common to other GPCRs - the ’Venus flytrap’ domain, which, like its namesake, snaps shut when activated.

’The Venus flytrap is one big binding pocket. Glutamate, the activator, goes deep inside the pocket and IMP binds close to the opening,’ explains Xiaodong Li, who led the research. ’The two molecules together help to stabilise the closed conformation of the receptor.’ Li says such allosteric effects are very unusual among GPCRs - a similar mechanism has been proposed for calcium sensing receptors, but has not yet been confirmed. 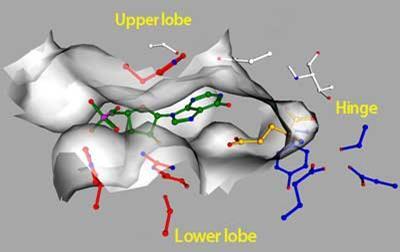 A molecular model of the ’Venus flytrap’ domain, showing key residues for L-glutamate (blue) binding near the hinge and for IMP (red) near the opening of the structure

The researchers pinned down the specific residues that interact with glutamate and IMP by creating mutant versions of the binding pocket and expressing them in human cells. They identified two separate sets of important mutations, representing residues of the individual binding sites, and built a molecular model showing the Venus flytrap domain clamped around the two molecules. According to their model, the receptor is

kept shut at the front by the negatively charged phosphate of IMP, which coordinates positively charged residues on the upper and lower regions of the ’jaw’.

Li says the research will make it easier to identify new flavour enhancers. And his team are already preparing to publish papers which will describe a similar mechanism in the sweet taste receptor, also a GPCR.

Perhaps most intriguingly, however, their work could aid drug designers trying to modulate the responses of GPCRs involved in disease. Li thinks that using allosteric modulators such as IMP could allow for increased selectivity. ’Designing a straight ligand is very tough because they are highly related to each other and the binding pockets of the ligands are very similar. If you work with allosteric modulators, like IMP, you can get away from the highly conserved binding pocket. Pharmaceutical companies have been looking for this type of modulator for a long time,’ he says.

’GPCRs are a very large family of proteins that control many things beyond taste,’ says Graeme Conn, a taste expert at Emory University in Atlanta. ’As such, the findings described in this paper should impact well beyond the boundaries of the taste field.’ But he adds that only a structural biology method such as X-ray crystallography can put the mechanism beyond all doubt.