Lethal injection, by far the most common form of execution in the US, is once again under the microscope following cases of botched and possibly painful executions in 2006.

The latest controversy was spurred by the execution of Angel Diaz in Florida on 14 December 2006, which took 34 minutes and a second round of injections to complete. Witnesses to the execution reported that Diaz ’gasped’ and ’grimaced’ during the procedure, and the autopsy that followed revealed chemical burns on Diaz’s arms, where needles had been pushed all the way through veins and into the surrounding soft tissue. Florida governor Jeb Bush suspended state executions the following day.

But this incident is just part of a growing trend. Executions were stayed in a total of nine US states in 2006, pending investigations into the effectiveness and legality of lethal injection. Some argue that it may violate the eighth amendment to the US constitution, forbidding ’cruel and unusual punishment’.

The standard lethal injection in the US, in use since its first trial in Texas in 1982, is a triple drug protocol. The first drug, usually sodium thiopental, is a barbiturate that acts on the central nervous system to render the prisoner unconscious. The second is a muscle relaxant, usually succinylcholine, which causes paralysis. And the third, potassium chloride, stops the heart. 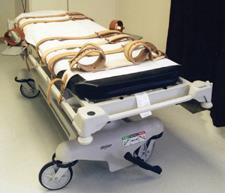 The triple drug protocol, first used in Texas in 1982, is being reviewed

Sodium thiopental is a general anaesthetic that stimulates GABA (gamma-aminobutyric acid) receptors in the brain and spinal cord. Although very fast-acting its effects are relatively short-lived, and some critics have argued that it may wear off before execution is complete. But while surgical patients are given a dose of 100 to 150 milligrams, as much as five grams may be used in executions, and such a high dose should itself induce coma and death.

Succinylcholine mimics the neurotransmitter acetylcholine by binding to and activating receptors, causing muscle fibres to contract. While succinylcholine remains bound to the receptors they cannot be activated by a neurotransmitter, which ultimately paralyses the muscles. An alternative neuromuscular blocker, pancuronium bromide, is used in some states.

Once the prisoner is anaesthetised and paralysed, potassium chloride then disrupts the delicately balanced electrochemical gradient in the heart, stopping it from beating.

Lethal injection is the preferred method of execution in 37 out of the 38 US states that have capital punishment (Nebraska still uses the electric chair). The majority of those states use the three drug protocol, with some minor variations. However, the choice of drugs is not driven by medicine or biochemistry, but by policy, according to Mark Dershwitz, an anaesthesiologist from the University of Massachusetts, US, who has testified as an expert witness in a number of cases brought by condemned prisoners to challenge the constitutionality of lethal injection. ’One state decided it and the rest adopted it,’ he told  Chemistry World.

The protocol was originally proposed by the anaesthesiologist Stanley Deutsch as an ’extremely humane’ way to bring about death. It was approved for use by Jay Chapman, the Oklahoma state medical examiner in 1977.

’But opponents have suggested that the current protocol results in the masking of pain experienced by the prisoner,’ said Austin Sarat, professor of jurisprudence and political science at Amherst College in Massachusetts, US.

A 2005 study published in the Lancet  medical journal concluded that methods of anaesthesia in lethal injection were insufficient and called for a national cessation and public review of the protocol.

States including California and Missouri have subsequently been ordered by federal judges to formally review their drug protocols. ’The issue is not if [lethal injection] should be banned but how it could be improved,’ said Sarat.

Jay Chapman himself is reported by the New York Times  to have said that he would no longer recommend the three drug protocol, and would instead suggest a single dose of barbiturate. But that could take as long as 40 minutes to kill, regarded as unacceptable by some medics and lawyers.

’People spend much longer in the execution chamber during lethal injection,’ said Jonathan Sheldon, a lawyer who specialises in capital punishment cases and co-authored The Lancet  study. ’It may look serene but, having talked to many objective experts, it seems that it is actually worse than electrocution or hanging, because it is so slow.’

Florida’s Commission on Administration of Lethal Injections, set up in the wake of the Diaz case to investigate the state’s execution protocol, is due (as Chemistry World  went to press) to submit its preliminary findings on 1 February, while California state officials promise to revise their lethal injection procedures by 15 May.