The toxic ’red mud’ from a ruptured chemical reservoir at an aluminium plant in Hungary that flooded local villages has now reached the Danube river. But attempts to reduce the mud’s dangerously high pH have succeeded, lowering it from around 13 to 9.5.

Since the disaster occurred on Monday, emergency services have been struggling to prevent 700,000m3 of caustic red mud reaching the Danube, using plaster to dam the flow.

The material, which covered houses, roads and gardens, had a pH of 13, making it extremely hazardous to humans and capable of burning skin on contact, according to Anna Nagy, the Hungarian government spokesperson for the disaster.

Four people have been killed and over 60 hospitalised. So far there have been 123 causalities - 12 are in a severe condition. A further three people are still missing. The Hungarian government has evacuated 700 people from three villages in the Veszprem region, ’double strengthened’ the reservoir and started 24-hour monitoring of the site.

National investigations into the cause of the accident are underway. ’One thing is for sure: there was no natural cause,’ says Nagy. ’It was obviously a human mistake.’ The total cost of the disaster will run to billions of Hungarian forints (tens of millions of pounds), she adds. 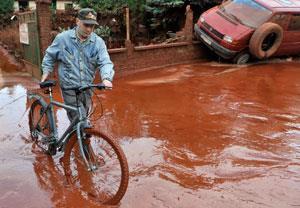 The caustic red mud has covered a huge area

The site at Ajka belongs to MAL Magyar Alum?nium, a private company established in 1995 during the sale of the Hungarian aluminium industry.

In a statement, the company said ’it would not be able to detect the signs of the natural catastrophe or could be able to do anything to avert it [sic].’ It added: ’The last physical daily inspection and laboratory analyses of last the water sample from monitoring system did not show any sign of the disaster [sic].’

According to MAL, the ’red mud’ contains a range of metal oxides, including 40-45 per cent iron oxide (Fe2O3), 10-15 per cent alumina (Al2O3) and 10-15 per cent silicon dioxide (SiO2), and ’is not a dangerous waste according to the European waste catalogue and hazardous waste list’. The high pH is most-likely the result of sodium hydroxide, used during the conversion of mined aluminium ores into Al2O3.

Nagy says the extent of the environmental damage is difficult to determine: ’A big part of the soil needs to be changed - how big is still in question.’ She continues: ’The surface waters have been polluted but not the deep drinking waters - which is very, very, fortunate.’ So far, the operation has been entirely run by the Hungarian emergency services, although several other organisations have offered to help.

’Red mud may contain radioactive elements, largely from the 232-thorium decay series with a contribution from the 238-uranium decay series,’ said Martin Preston, a marine chemist at the University of Liverpool, UK. ’The radioactivity is more concentrated by a factor of three or so in the red mud than in the original ore. However red mud is not normally treated as a radioactive waste.’