Japanese researchers have created a rapidly self-healing hydrogel material, composed largely of water, which they say could have applications in regenerative medicine and green chemistry.

The new material is remarkably tough compared to other hydrogels of the same kind - non-covalent hydrogels - which have until now been regarded as fairly weak. Lead researcher Takuzo Aida, based at the University of Tokyo, compares it to silicone rubber in terms of strength. Perhaps most impressive, though, is that if the gel is cut with a razor, it immediately sticks itself back together, healing in around three seconds. 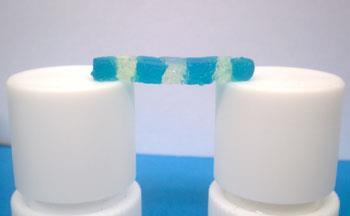 The strong hydrogel blocks can be strung together

Equally remarkable is the ease with which the gel can be made. At 98 per cent water, it contains small amounts of just three other components: sodium polyacrylate, a branched molecule dubbed ’G3-binder’, which is covered in guanidinium ions, and clay, in the shape of nanosheets. These are simply mixed together to make the gel, which forms in seconds. ’Anyone - even my wife - can prepare our material by just mixing the necessary components in water at room temperature,’ says Aida. 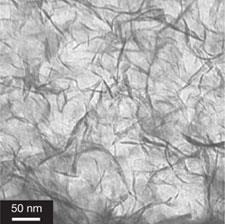 The binder molecules give the gel its self-healing properties by cross-linking the clay nanosheets. The positively charged guanidinium ions stick resolutely to negatively charged oxyanions on the surface of the clay. Cutting the gel rips these apart, Aida explains, but if the freshly cut surfaces are pushed against each other straight away, the reverse process occurs and the oppositely charged ions stick back together.

As Alain Domard, a hydrogels expert at University Claude Bernard Lyon 1 in France, points out, however, the gel’s self-healing properties are limited. ’It requires the use of fresh cuts,’ he says. ’This signifies that the mechanism is kinetically limited and the material reconstituted from the cuts cannot be compared to an original gel with the same global shape.’ He adds that deeper studies of the molecular mechanisms of gel formation are required in the future.

For Aida, it’s a triumph that the material heals at all - there are no other covalent hydrogels with comparable mechanical properties that can do this, he says. But it’s the combination of self-healing, strength, ease of preparation and potential applications that, according to Aida, makes it truly unique. He says the material could be used to support enzymes and catalysts for organic synthesis, or as a component of regenerative medicine and artificial cartilage. ’It could be prepared on-site by medical doctors for surgical operation,’ he says.

But Domard says the gels need to be made cheaper and more environmentally friendly before they can be considered for widespread use. ’To my knowledge, polyacrylic and [the team’s binder] structures are still produced from oil,’ he notes.