Scientists trick hydrogen into behaving a bit like a metal 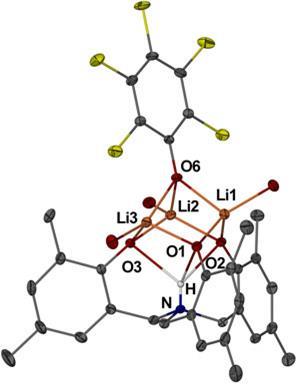 For the first time, scientists have shown that hydrogen can stand in for alkali metals in typical alkali metal structures.

Hydrogen, having just one s electron, is chemically analogous to group 1 alkali metals, which possess a single valence electron in their outermost s orbital. However, the two exhibit pronounced structural differences under ambient conditions. This is clearly shown by hydrogen being a gas and the group 1 elements being reactive solid metals at room temperature and pressure. While some similarities have been demonstrated, in particular with lithium, the smallest and lightest group 1 metal with the most covalent character, comparable participation of hydrogen in the solid state has remained unverified.

Now, Matthew Davidson and colleagues at the University of Bath in the UK have devised an organometallic synthetic strategy to make pseudocubane motifs of ammonium tris(phenol) ligands and lithium or sodium atoms, where one of the metals has been replaced by a hydrogen atom. The hydrogen forms the rarely reported trifurcated 4-centre hydrogen bond. Such an arrangement is not uncommon for the larger alkali metals, which can accommodate higher coordination numbers, but is not preferred by hydrogen.

Davidson says their interest lies in gaining a better understanding of how ligands like  amine tris(phenolate) can be used to control reactive metal centres. A thorough comprehension of the coordination chemistry and the ability to draw conceptual similarities between the reactivity of hydrogen and metals as Lewis acids could help advance areas such as organocatalysis.

Inorganic materials chemist Dominic Wright of the University of Cambridge in the UK, is excited by the study. ‘The elegant demonstration that H+ ions can function in the same way as alkali metal ions within distinct molecular arrangements could herald a new direction in molecular and supramolecular main group chemistry.’

This work confirms hydrogen’s position at the top of group 1 and seems likely to stimulate further debate and discussion.