Japanese chemists have created a small molecule which mimics the way natural enzymes chew up hydrogen. The synthetic model should inspire designs for new catalysts which can add hydrogen to organic compounds; break up hydrogen in fuel cells; or (running in reverse) help produce the fuel for a hydrogen economy.

Many bacteria, including the stomach-ulcer causing Helicobacter pylori, can use hydrogen as a source of energy - thanks to a variety of hydrogenase enzymes which catalyse the destruction of molecular hydrogen into its constituent parts: two protons and two electrons. Two metal atoms cooperate to do the job in the enzyme’s active site: either two irons, or an iron and a nickel atom. Exactly how they work - and the importance of their sulfur, carbon monoxide and cyanide ligands, usually hostile to life - has puzzled scientists who rely on expensive solid platinum catalysts to do the same job in fuel cells.

Seiji Ogo, of Kyushu University, and colleagues picked on the Ni-Fe hydrogenases; more prevalent in nature, but less well understood than Fe-Fe hydrogenases. Ogo’s group didn’t manage to create an exact Ni-Fe synthetic copy; instead they synthesised a similarly-shaped small nickel-ruthenium complex, complete with sulfur ligands, which ripped up hydrogen bubbled through water at room temperature. This produced protons and left a hydride ion bridging across the Ni-Ru core. 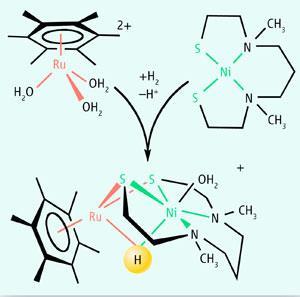 The hydrogenase mimic was created by combining a nickel and ruthenium complex, which were joined with a hydride ligand as molecular hydrogen was cleaved in water

As Ogo points out, this is only the first step to full hydrogen destruction. His team plans to remove electrons from the Ni-Ru hydride complexes, and ultimately to replace ruthenium with iron, and make the reaction catalytic. But even the halfway-house hydride complexes were useful: they reacted with protons to re-create hydrogen, and also reduced organic compounds like benzaldehyde.

Chris Pickett, who works on synthetic hydrogenases at the University of East Anglia, UK, told Chemistry World that the reaction was an ’important prototype’. ’To achieve this in water is significant; though doing the same chemistry at nickel-iron assemblies, with a coordination environment closer to that found in the enzyme, and achieving catalytic oxidation of hydrogen, remains a challenging goal,’ he said.

Thomas Rauchfuss, of the University of Illinois, US, said the synthetic compounds provided valuable information about how natural hydrogenases worked - for example, x-ray crystallography was able to pinpoint the position of the key hydride, which would not be possible via protein crystallography on the large natural enzyme. And the inorganic enzyme analogues might eventually be able to break up hydrogen in electricity-producing fuel cells more efficiently than current expensive platinum electrodes, or inspire catalysts tolerant to compounds such as sulfur, which poison many industrial catalysts.