The University of Manchester and IBM have struck a deal to promote joint research between the two organisations.

The University of Manchester and IBM have struck a deal to promote joint research between the two organisations.

IBM and the UK’s largest university have created the IBM-Manchester partners programme to identify high flyers from each organisation to work together on projects as diverse as science education in local schools and patterns for e-business.

John Perkins, vice president and dean of the faculty of engineering and physical sciences at Manchester signed the deal. ’It’s not about money, it’s about interactions between people,’ he told Chemistry World. ’The deal involves a commitment from IBM and from the University to release people to work together on projects of mutual interest.’

The University’s potential participants will be selected through a competitive application process. The programme will not appeal to everyone, said Perkins, but there is great enthusiasm for it both in the university and at IBM.

Linda Macaulay at the school of informatics is the first to benefit from the scheme, with funding for a project to investigate e-business. Perkins said the scope of the partnership programme is wider than the computer-related research often associated with IBM. Materials and chemistry research feature highly at the company, he said, offering opportunities for partnerships in these areas.

Although IBM has other collaborations in academic institutions, the Manchesterproject’s focus on people not money sets it apart, said Perkins. ’The relationship that we have is unique,’ he said. Katharine Sanderson 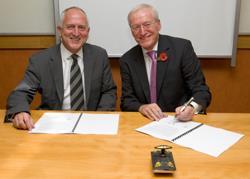