Extreme close ups of salt and pepper have won the Visions of Science award.

Extreme close ups of salt and pepper have won the Visions of Science award. 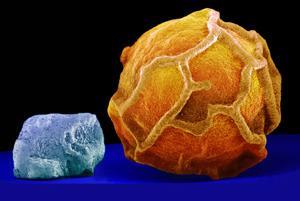 A whole peppercorn and a single grain of sea salt when seen under a scanning electron microscope was the winning image at the annual science photography competition, organised by Novartis and the Daily Telegraph. David McCarthy from the School of Pharmacy at the University of London created the image, entitled simply Salt and pepper.

The simple micrograph, which is black and white in the original, was coloured by McCarthy’s colleague, Annie Cavenagh. ’I wanted to make the peppercorn hot like a sun,’ she said, explaining the orange and blue colours she chose.

Jennie Jewitt-Harris - chair of the judging panel said that this year’s competition had been ’fiercer than ever’. Adam Hart-Davis, one of the judges, told Chemistry World that the decision for the winning shot was almost unanimous. ’Simplicity is very important in these pictures,’ he said. Katharine Sanderson