Carbon nanotubes can be degraded by an enzyme found in human immune cells, report US researchers

Carbon nanotubes can be degraded by an enzyme found in human immune cells, report US researchers.  The results suggest that nanotubes - which may find use in a range of applications spanning medicine and materials - may not be as harmful to human health as previously feared.

Determining just how toxic carbon nanotubes are has become one of the most pressing questions in nanotechnology, due to the myriad of applications they could be used in. Previous studies have compared nanotubes to asbestos, and just like asbestos fibres, nanotubes are too long to be enveloped by macrophages - the immune cells that usually swallow up invading pathogens. Exposure usually triggers a strong inflammatory response and can eventually lead to lung disease or tumours.

Now, researchers have found that an enzyme called myeloperoxidase, which is present in human immune cells called neutrophils, can break down nanotubes and stop the immune response. The myeloperoxidase enzyme uses hydrogen peroxide to produce hypochlorite and reactive radicals; a potent mixture that usually targets invading bacteria, but has now been found to degrade nanotubes and in the process release CO2 gas. 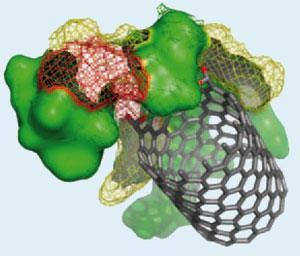 A molecular model of the myeloperoxidase enzyme ’eating’ a nanotube

’Neutrophils appear in abundance during inflammation, so it is possible that they will be able to chew up any nanotubes that enter the lungs,’ says Valerian Kagan, who led the research at the University of Pittsburgh in Pennsylvania, US. ’The biodegradation products no longer cause irritation - so in low doses, this mechanism could be very effective.’

But Kagan’s team have only examined cell and biochemical models so far, and note that further investigations will be needed to measure how well the process works in animals.

Krzysztof Koziol, a nanotube expert at the University of Cambridge, UK, is enthusiastic about the findings. ’This study brings back a positive light to the possibility of using carbon nanotubes as potential medical tools for delivery of therapeutic agents and other types of non-viral delivery type treatments,’ he told Chemistry World.

’This is an important finding that has ramifications for the hazard and risk assessment of nanotubes,’ says Ken Donaldson, who led a pilot study into nanotube toxicity at the University of Edinburgh, UK. ’This enzyme may stop nanotubes building up to a harmful dose, but more research is needed to determine whether the process actually occurs in living lungs.’

Also in need of research is how the body responds to a variety of exposure levels, Donaldson notes, as long-term low exposure may not generate enough neutrophils to be effective. ’However, this raises the question as to whether other enzymes found in lung cells might also be able to degrade nanotubes,’ he adds.