Improving the odds against a killer disease

A new concept in the treatment of breast cancer has been announced by a European research team. One in eight women in the western world could be affected by breast cancer, and two thirds of these cases are hormone-dependent. 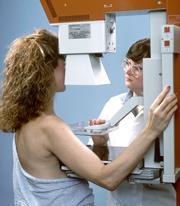 Tamoxifen, a selective oestrogen receptor modulator (SERM) is an effective treatment in such cases. Cancer cells demand oestrogen, but the drug competes with the hormone, effectively blocking its supply.

An alternative treatment is chemotherapy, whereby a metal-based toxin is administered to kill the cancer cells. Unfortunately, chemotherapy does not solely target the cancer, and healthy cells can also be put at risk.

The research team from Ecole Nationale Sup?rieure de Chimie de Paris and Universit?t M?nchen, led by G?rard Jaouen, believe that SERMs can guide chemotherapy compounds to the cancer.  This is achieved by mixing the metal-containing active sites of chemotherapy drugs with SERMs. By doing this the team have demonstrated the potential for a new concept in highly effective cancer treatment with fewer side effects.