A rapid analytical technique could facilitate more extensive studies of the reasons for the worldwide decline in bee populations. Studies using the method suggest insecticides used to coat crop seeds may be partly to blame.

Neonicotinoid insecticides are used to coat crops such as corn and oilseed rape, and are one of several groups of chemicals identified as suspects in the disappearance of honey bees - a phenomenon referred to as colony collapse disorder. One theory is that the insecticides are passed to the bees in pollen.

Using ultra-high performance liquid chromatography, Andrea Tapparo at the University of Padua in Italy and colleagues now show that it is possible for bees to pick up a lethal dose of insecticide by grazing on sap produced by crop plants and present on leaf tops.1 Building on earlier work in 2009,2 the researchers show that concentrations of neonicotinoids present in drops collected from the leaves of corn plants are high enough to kill bees within a few minutes. 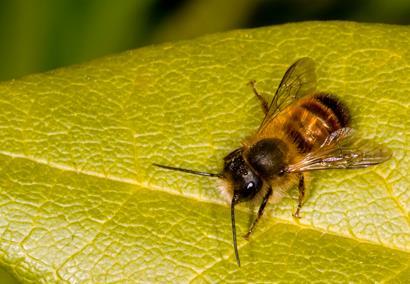 Although Tapparo doesn’t think the mechanism they identify is the primary cause - noting that bee decline is probably due to many different factors - he says it can’t be ignored. ’It must not be neglected that bees can be exposed to high doses of insecticides,’ he says. ’The exposure scenario should be studied with particular attention.’

Galen Dively, an entomologist at the University of Maryland, US, doubts it is a major exposure route. ’Several Swiss studies and tests by Bayer CropScience indicate honey bees are not likely to forage for water to any significant degree in seedling corn, which overlaps with the spring nectar flow and at a time when rains are usually sufficient to provide other water sources,’ he explains. ’Certainly the possibility of direct exposure exists but additional studies are needed.’

Crucial, though, is the method itself, which could facilitate much more widespread research into bee decline. Tapparo’s team shunned more sophisticated chromatographic techniques involving mass spectrometry (HPLC-MS) in favour of an approach that would be faster and available to a broader range of researchers.

’I think for example, biologists, or students or teachers in the agronomic field, for them it’s not possible to have direct access to mass spectrometer instrumentation,’ says Tapparo. ’But HPLC is easier. And if we want to extensively study the mechanism involved with the neonicotinoids, we probably need a very simple analytical procedure.’