Chemists beware - the metamaterialists are making startling progress. The latest structure composed of a metamaterial is a remarkable cloaking device that can render an object invisible to microwave radiation - in two dimensions at least.

The latest device has been designed by researchers from Duke University in North Carolina, US, together with John Pendry at Imperial College London, UK. Pendry had earlier provided the theory to create a system that would make an object invisible to microwaves.

The ’invisibility cloak’ consists of a series of concentric rings of a fibreglass-based composite upon which have been imprinted numerous U-shaped copper elements of millimetre dimensions in a precise geometric formation. The dimensions of these copper elements vary slightly on each successive concentric ring. The target object - a copper cylinder - sits in the centre of the innermost ring. 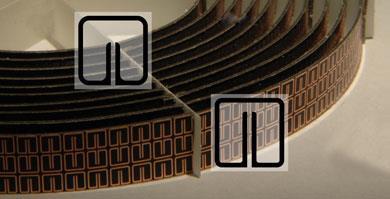 As microwave radiation, of wavelength around 3 cm, strikes the cloak, the beams are diverted around the object and meet up at the other side - similar to the way that water flows around a boulder in a river.

The effect is achieved because of a subtle gradient in the electromagnetic properties of the cloak. ’The cloak’s material properties vary from point to point and vary in a very specific way,’ David Smith, one of the Duke researchers, told Chemistry World. ’When the phase fronts meet the material, they are swept smoothly around it due to the spatial distribution of the properties of the cloak.’

Pendry said, ’We knew that no naturally occurring materials would do the job, but the new class of metamaterials, which owe their properties to their internal structure rather than their chemistry, have proved yet again that they can meet some of the most extreme challenges.’

Or, as Smith jokingly said of chemists, ’We are your competition!’

The Invisible Man made real

Cloaks that make objects invisible will be made within 18 months, say UK and US scientists.

Ions in the open air

Ionisation techniques that remove the need for sample preparation are taking mass spectrometry into new and exciting research areas, reports Steve Down