An iron catalyst that is not only greener than many of its precious metal competitors, but also catalyses reactions that they can’t, could open new avenues in transition metal catalysis, say Chinese researchers.

Qi-Lin Zhou and colleagues from Nankai University in Tianjin have developed an iron complex that converts diazoesters into chiral ethers and alcohols. Using iron rather than precious metals such as palladium and platinum is an important goal in synthetic chemistry to increase sustainability, since iron is cheap and environmentally benign.

However, Zhou explains that chemists have struggled to develop iron catalysts that have good selectivity for making one enantiomer of chiral (handed) compounds. Most either have poor selectivity or only work with a few carefully selected molecules, and struggle to compete with complexes based on other metals. Zhou’s team have shown that their catalyst not only gives excellent selectivity, but it works with a wide variety of alcohols, and even water. When the team tried the reaction with other metals like copper or rhodium, both the yield and selectivity dropped dramatically. 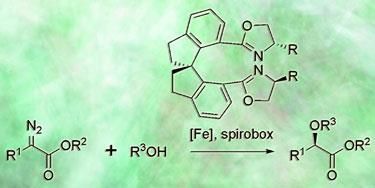 ’It’s really important for iron catalysis to not only replicate what other people have done with platinum or rhodium, but to actually do things that these other metals cant do,’ says Paul Chirik from Cornell University in Ithaca, US. ’Doing this reaction with water to make chiral alcohols is brilliant,’ he adds, ’and the fact that it’s iron catalysed just makes it even better.’

’The main reason for the success of the catalyst is the unique spiro structure of the ligand,’ says Zhou. The ’spirobox’ ligand is made from two spiro-fused indane rings with a pair of substituted oxazoline groups. Zhou explains that the rigidity of the ligand helps it bind tightly to the iron centre, creating a well-defined ’chiral pocket’ that directs the selectivity of the reaction.

Chirik is excited about the implications of the paper but points out that it’s not entirely clear how the reaction works. ’I think people are going to have to study these reactions a bit more to figure that out. If they really do have a way into iron species that are catalytically active and have a nice chiral pocket, then there are all kinds of new things to think about doing,’ he adds.

Zhou is already exploring other applications for the catalyst: ’We have some promising preliminary results for insertion reactions into N-H, S-H and Si-H bonds,’ he says.