Is your lab ready to go veggie?

Vegetable reagents mean chemists in developing countries could save a bunch

Imagine heading down to the vegetable patch not the store cupboard next time you need a jar of sodium hydride. Or how about consulting your local market stall, not the chemicals catalogue, next time you need an elaborate catalyst? Not as strange an idea as it sounds, thinks Geoffrey Cordell, of the University of Illinois at Chicago, US.

Cordell has published a study into the wealth of useful reactions that can be performed using fruit and veg in place of other, more conventional reagents. In a review article published in the latest issue of the Journal of Natural Products he demonstrates that the greengrocer’s could be an unexpected goldmine of sustainable, cheap reagents that would benefit chemistry in developing countries.

Chemists in developed countries are used to getting reagents from the store room immediately, or waiting a few days for delivery. This is a luxury not shared by researchers in less affluent countries, for whom even the most basic chemicals are subject to import taxes and customs delays running to months. ’This is a key barrier as to why there are so few synthetic organic chemistry groups in developing countries’ said Cordell. ’How can you begin to change that?’

The whole root, and nothing but the root

Most drugs and other valuable compounds contain at least one chiral centre, which must be put in place using subtle chemistry and often expensive and sophisticated catalysts. Enzymes do the job exquisitely, and biosynthetic organic chemistry, where enzymes are set to work in the lab, is growing in popularity as an efficient and green route to chiral compounds.

Cordell’s philosophy, and that of the researchers who feature in his review, is that if the enzymes are present in fruit and veg, why not do away with costly enzyme isolation and immobilisation and just use the whole plant? Over thirty vegetable varieties have been found to promote useful reactions already, from beetroot to burdock, pumpkin to potatoes.

’What we’ve done is the relatively simple stuff,’ Cordell told Chemistry World.  ’Buying materials from local markets, grinding them up, throwing in a substrate and seeing what comes out. It’s basically empirical.’ No other reagents are needed and the reactions that have been studied so far can be done in water, making these veggies ’green’ in more ways than one. 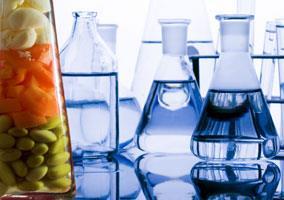 The chemists Cordell meets in developing countries have been ’kind of amazed’ at what can be achieved in the lab with crops that are effectively growing in their back yard. The humble carrot, for example, has been used to reduce azidoketones, key intermediates in synthesis of pharmaceutically useful beta-amino aryl ethanols. Crucially, the carrot catalyst produces only one enantiomer of the alcohol product.

Cordell collaborates with Brazilian chemists led by Telma Lemos from the Universidade Federal do Cear?. The group investigated several plants that are used widely as food in north-eastern Brazil, including aubergine, sweet potato and cassava root. They tested them in the reduction of acetophenone and found that all the plants converted the carbonyl group to an alcohol, with the best yields from the cassava-catalysed reaction. Investigating further, they found the cassava, a root used as a staple by millions in tropical countries, delivered excellent enantiomeric control and selectivity over carbon-carbon double bond reduction.

At present, chemists have only scratched the surface of what is possible: ’It’s wide open’, said Cordell. He is currently investigating ways of immobilising crude vegetable mix so that the enzymes can be re-used, but his goal is a large database of plant crops and the reactions and substrate types they respond to. Investment is needed, he says, to make research happen on a systematic scale. With finite stocks of petrochemicals and the cost of catalytic metals such as platinum and palladium spiralling upwards, Cordell hopes that chemical firms in the west will see the value of vegetable reagents.