Supposed relics of St Joan of Arc - the French heroine burned at the stake in 1431 - are forgeries, French forensic scientists have revealed. They were probably leftovers from an Egyptian mummy, used in pharmaceutical remedies in Europe’s Middle Ages.

The charred remains of a human rib, together with chunks of wood, a small fragment of linen and a cat femur, were discovered in 1867 in a Paris pharmacy - with an inscription: ’Remains found under the stake of Joan of Arc, virgin of Orleans’. Since then they have been entrusted to a museum in Chinon belonging to the Archdiocese of Tours. 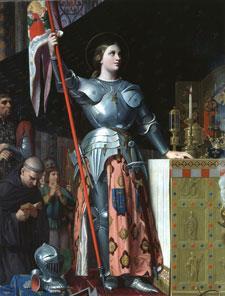 ’No moon to keep her armour bright’: this vision of Joan, by Jean Auguste Dominique Ingres (1780-1867), hangs in the Louvre Museum, Paris

But Philippe Charlier, who works at the Raymond Poincar? Hospital in Garches, near Paris, and colleagues say the relics came from an Egyptian mummy. Their results will be presented at an international conference in Loches, France, later this week.

The team were surprised by what their analysis uncovered. ’I’d never have thought that it could be from a mummy,’ Charlier told the journal Nature. But the evidence was clear: carbon-14 dating placed the remains somewhere between the third and sixth centuries BC, while infrared, atomic-emission and mass spectrometry matched with Egyptian mummies of the period.

Nor had the bones been burnt: the charred black crust was composed of organic vegetable residues and minerals like quartz and copper, as electron microscopy revealed - not at all like burnt tissue. The linen was characteristic of mummy wrappings, and large amounts of pine pollen were present. Although pine trees didn’t grow in Normandy when Joan of Arc was killed, pine resin was used in Egypt as part of the embalming process.

The team also enlisted the help of expert ’noses’ from the perfume industry, who sniffed out vanillin hints from the relics - suggestive of a decomposing body, according to Charlier, who also told Nature that the Catholic Church was ready to accept the results.