Cases of botulism in the US and Canada have been linked to carrot juice.

They might help you see in the dark, but reports of carrots that cause paralysis are alarming consumers across North America.

Two people in Toronto, Canada were paralysed this week after drinking carrot juice that tested positive for botulinum toxin, which targets the nervous system. The juice had already been ordered off shelves in the US last month after it was linked to four cases of botulism there. One person is reported to be completely immobile following the infection.

The US Food and Drug Administration (FDA), investigated the first reported botulism case and traced it back to carrot juice produced in California. The FDA concluded that there was a risk to consumers if the juice was not refrigerated. 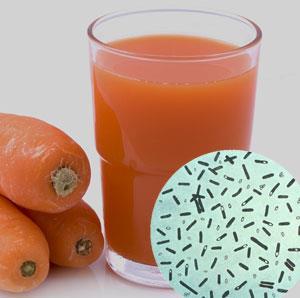 Tim Warner, a spokesperson for the Californian company that produced the juice, Bolthouse Farms, told Chemistry World  that the cases were related to what he described as temperature abuse. ’There is always a risk of this with 100 per cent carrot juice if it isn’t kept refrigerated. All of our juice is labelled, telling consumers to keep it in the fridge,’ he said.

Mike Peck, a microbiologist from the UK’s Institute of Food Research, IFR agreed that the toxin, produced by the bacterium Clostridium botulinum, was likely to have appeared following incorrect storage of the juice.

’The toxin is the most poisonous substance known and as little as 30ng can be fatal,’ Peck told Chemistry World. ’These kinds of products go through a heating process [to kill the bacteria] and, following that, refrigeration is relied upon for prevention of foodborne botulism. It looks as if the refrigeration chain has not been respected here, and this has allowed growth of Clostridium botulinum.’

Peck emphasised that this was not a risk particular to carrots.

Producers in the US are currently on high alert after recent cases of the E. coli O157:H7 bacterial infection were traced to spinach that came from one major Californian producer. The infamous bacterial strain is particularly virulent and can lead to serious illness. So far the contamination has affected 26 US states and killed at least three people.

Arthur Whitmore, a spokesperson for the FDA said that the department has developed codes of practice to avoid contamination of produce.

’These toxins are not rare. C. botulinum lives in the dirt so contamination can happen and what we aim to do is minimise the risk,’ he said.

Whitmore added that, despite the recent high profile cases of contamination, there has been a downward trend in the number of cases in recent years. He advised consumers to be responsible with food preparation and to make sure that they keep their food either hot or cold in order to protect themselves.

Helen Ferrier chief science and regulatory affairs advisor for the UK’s National Farmers Union (NFU) agreed, saying that there are simple measures that consumers can take to prevent food poisoning. ’A lot of it is common sense,’ she said. ’Keep your fruit juice in the fridge and don’t eat food with mould on it.’