American researchers have discovered that a chemical exuded by the colourful skin of poison frogs is a superb mosquito repellent.

Paul Weldon, from the Smithsonian Institution, Virginia, and his colleagues investigated the effects on mosquitoes of a highly toxic alkaloid, one of a class of pumiliotoxins, which they extracted from the skins of tropical poison frogs (dendrobatids)1.

The team found that most yellow fever mosquitoes steered clear of membranes or wires coated with the pumiliotoxin, and some of those who landed subsequently rolled onto their backs and died. Very little mosquito repellent was required to have a toxic effect, far less than is naturally found on the frog’s skin, and the natural pumiliotoxin was far more toxic to invaders than its synthetic enantiomer, the mirror image form of the molecule. 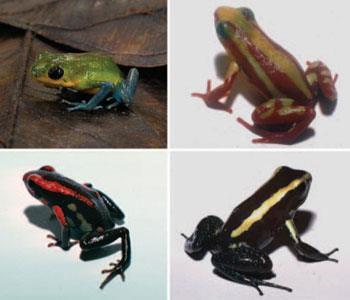 The mosquito-repelling alkaloid is just one of more than 350 extracted from poison frog skin, many of which defend against predators. But it’s not likely that humans could use it, at least in its original form. ’I wouldn’t put extracts of exotic frog on my skin,’ said Andreas Rose, who works for the insect control company BioGents, based at the University of Regensburg, Germany.

Frogs are not the only animal to enjoy a natural mosquito defence system, Rose said. Crested auklets, for example, emit citrus-scented mosquito-repelling aldehyde compounds during the breeding season2.

Less fortunate animals must borrow their protection from other sources. Capuchin monkeys in Venezuela have been seen to ward off mosquitoes by rubbing millipedes into their fur, taking advantage of the worms’ defensive benzoquinone compounds3. Bluetits bring fresh aromatic plants to their nests to keep mosquitoes away4. And we humans can buy mosquito repellent from a shop - though, says John Pickett of Rothamsted Research, Hertfordshire, none of these products work particularly well.

Pickett’s team have found that some people naturally repel mosquitoes. As previously reported in Chemistry World, they give off a collection of compounds related to the stress response. The research, which may find commercial application, is yet to be published.