A new way of measuring nuclear magnetic resonance (NMR) in liquid samples could have implications across spectroscopy and imaging, report US researchers.

Michael Romalis and colleagues at Princeton University, New Jersey, US, have found that polarised laser light can be rotated by an inherent property of atomic nuclei - nuclear spin. 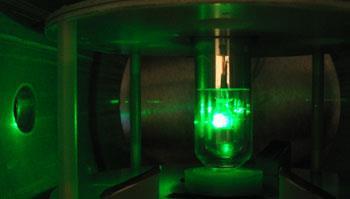 Nuclei possess the quantum mechanical property ’spin’, which means they act like tiny bar magnets. When a magnetic field is applied, the spins will align themselves with the field (a low energy state) or against it (a high energy state). When nuclei absorb energy from radiofrequency waves the spin flips from the low energy state to the high energy state. This is the NMR effect, which is routinely used by chemists to probe molecular structures, and is the basis of molecular resonance imaging (MRI) scans.

Romalis’ team measured what happened to polarised laser light as it passed through samples of either liquid xenon (129Xe) or water in which the alignment of the spins was controlled. They observed that the polarisation of the light was rotated, and that the degree of rotation is related to the extent to which nuclear spins are aligned with one another. Conventional NMR is measured as a property of the bulk sample, but this measurement is specific to the small part of the sample that the light is shining through. In this way it can give precise details about the spatial distribution of spins in the sample.

Warren Warren of Duke University, Durham, North Carolina, US, who is researching similar techniques, is intrigued by the results. ’The physics itself is remarkable,’ Warren told Chemistry World.

The technique only works for transparent samples, so imaging applications would be limited. It could be used for investigating and visualising the components of cells, Romalis said, however this would need more development to improve the sensitivity.

NMR data can be used in spectroscopy to study the positions of individual atoms in molecules, as well as in MRI to create pictures of body tissues. Romalis said that applying his technique in spectroscopy ’seems more obvious right now’. The technique could be adapted for spectroscopy using different laser wavelengths, he explained: ’The amount of rotation for different wavelengths of light will be dependant on the molecular species as well as the interaction of the nuclear spin with the laser.’

Warren highlights the observation that the effect is amplified for heavy atoms such as xenon. ’This is also an interesting result, as conventional magnetic resonance methods are generally much worse for heavy atoms. He agreed, however, that the full potential will not be seen immediately: ’It will be a while before this becomes a reasonable alternative to conventional biomedical imaging.’

NMR and the 3D world of proteins

Detecting brain damage before it happens