Lead pipes did contaminate water supplies, but not enough to cause severe poisoning 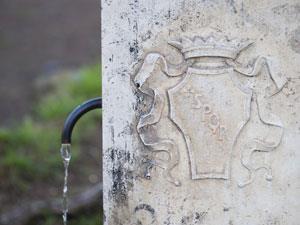 Some historians put the collapse of Roman civilisation down to lead poisoning, thanks to the vast networks of lead pipes used to supply water in cities. But a recent analysis of river sediments found that although ancient Rome’s ‘tap water’ was polluted by lead from plumbing, it wouldn't have caused serious illness.1

A team led by Hugo Delile at the University of Lyon in France used ratios of the isotopes lead-204 and lead-206 to calculate lead pollution in the Italian river the Tiber that would have come from the pipes in Roman cities. They did this by measuring the isotopic ratios in riverbed sediments, as well as in five ancient water pipes from Rome. They then worked out the fraction of lead in river water that leached from the pipes, and showed that the pipes had increased the lead content in water by up to two orders of magnitude. But they concluded the actual concentrations of lead that would have been consumed are ‘unlikely to have represented a major health risk’.

The role of lead pollution in the decline of the Roman empire is still a subject of debate. Thirty years ago, geologist Jerome Nriagu argued that lead poisoning was a major driving force,2 but others have been unwilling to accept this as the sole cause. This analysis suggests that while the use of lead pipes may have raised lead levels in the drinking water of ancient Rome, it wouldn't have been enough to cause serious poisoning.