Less is more for DNA reactions

A technique allowing the use of small amounts of DNA for efficient DNA-directed chemistry has been developed by scientists in Germany.

Oliver Seitz and Alexander Roloff at the Humboldt University of Berlin in Germany have made it possible to use incredibly small amounts of nucleic acids in important DNA-directed reactions.

DNA-directed chemistry is used in applications as diverse as nanowire synthesis and light harvesters to drug screening and diagnostics. This includes DNA-directed ligation reactions, in which two molecules are chemically joined. However, gaining enough of a particular DNA sequence from biological sources is challenging. Living organisms usually produce only small amounts and these may not be exactly uniform in nature.

The polymerase chain reaction (PCR) is the answer to this availability problem. PCR uses the enzyme polymerase to copy a small sample of DNA – the template – and make multiple copies of it with high accuracy and efficiency.

The kind of ligation used in Seitz’s work is native chemical ligation (NCL), which originates from protein chemistry. NCL is highly chemoselective, fast and tolerant to different functional groups. Seitz explains: ‘We grafted the functional groups required to drive ligation onto DNA to make peptide nucleic acids (PNA).’ These PNA conjugates recognise and bind the template DNA, bringing the reactants close together to begin the ligation reaction.  Without the template DNA, no reaction takes place between the PNA molecules. 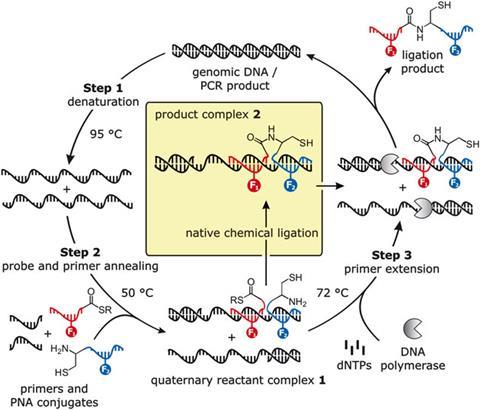 Usually, a relatively large, nanomolar amount of DNA is required to begin the reactions. DNA-directed chemistry is also hindered by a concept called product inhibition. Seitz describes the process: ‘The ligation product is always longer than the two reactive conjugates, binds the template more effectively and blocks access so more product cannot be produced.’

The researchers had the idea to combine DNA-directed ligation with PCR amplification so that a much lower amount of original DNA template can be used. PCR refreshes the amount of available template so more ligation reactions can occur, reducing the effect of product inhibition.

Justin Chalker, an expert in DNA-directed chemistry from The University of Tulsa, US, remarks: ‘The exquisite chemoselectivity of NCL ensures compatibility with the high temperatures in PCR, enabling a single, streamlined operation.’ Chalker believes that the vanishingly small quantity of DNA required is especially important when the DNA template is derived directly from biological samples.

Seitz’s team envisages a wide range of applications, including accelerating drug discovery by creating amplifiable product libraries. Their next step is to attempt to eliminate product inhibition and template copying altogether by making products with a low affinity to the template that would be displaced by fresh reactants.