Ben Feringa and colleagues at the University of Groningen have built a series of different synthetic motors in the last few years, but this is the first to feature a locking mechanism. It’s a neat single-molecule system in which the ’rotating arm’ of the molecule also acts as a plug for a socket formed from a dibenzo[24]crown-8 ring. The two halves of the molecule are joined by a double carbon bond.

As Feringa explains, the 360? rotation of the arm is caused by isomerisations driven by light and heat, but, crucially, only when the socket is unplugged. This requires a strong base to draw protons away from an NH?2 group in the plug, breaking the hydrogen bonds that hold it in place. ’If you irradiate it with light when it’s in the locked state it doesn’t do anything, but as soon as you deprotonate it unlocks,’ says Feringa. 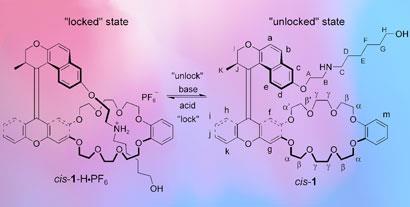 David Leigh, who works on molecular motors at the University of Edinburgh, UK, is interested to see that hydrogen bonding is strong enough to keep the two parts together. He also notes that the paper illustrates the difference between machine mechanisms in the macroscopic and molecular worlds - whereas the moving components in macroscopic rotary motors have angular momentum, the twisting action in the molecular version has several different stages associated with it, each having different sorts of driving forces.

Another noticeable difference is that the team’s nanoscale motor takes more than half an hour to complete one rotation, but Feringa says the speed could be tuned all the way to micro- or even nanoseconds. ’It is a rather slow process,’ he says, ’That has to do with the fact that the thermal isomerisation steps are not as fast as the photochemical isomerisation steps, which are extremely fast, but in this particular case, we’re not focusing on enhancing speed, but proving the principle of the locking.’

The team has already designed other motors that spin at more than three million times a second and are currently building a ’nanocar’. They plan to connect the rotational movements produced by their lockable motor to the back and forwards movements of pistons. Feringa is also keen to explore how the devices can be incorporated into biological systems.

Relative to biological molecular motors, says Henry Hess, a nanobiotechnologist at the University of Florida, US, synthetic motors still have a way to go. ’But Feringa’s paper is a major step forward,’ he says.