When a reaction speeds up in a microwave, is it down to the heat or the microwaves?

Microwaves have been used to promote organic reactions since the 1980s and they can lead to higher yields and shorter reaction times than conventional heating, but why? Conventional wisdom says that it’s the heat that promotes the reactions, but new research shows that the waves could be interacting with the molecules directly.

Gregory Dudley and colleagues from Florida State University, Tallahassee, in the US, discovered a microwave effect occurring during a Friedel-Crafts benzylation reaction in a microwave. The microwave-absorbing polar reactant - a pyridinium - reacted in a non-polar and largely non-microwave-absorbing solvent - toluene. Previously, a non-polar reaction system had to be doped with ionic liquids, which converted the microwaves to heat. ’Polar molecules interact more strongly with microwaves than non-polar molecules,’ explains Dudley. ’So we tried to design a system in which only the reaction substrate would interact with the incident radiation energy.’

The team found that the microwave irradiation induces reactivity levels that can’t be duplicated by conventional heating, without reaching the temperature required in conventional heating. ’It’s hard to speculate what exactly is going on,’ says Dudley. ’Our focus was to identify an effect.’ Dudley adds that there is still much to learn about the differences between activating reactions with microwaves and conventional heating. 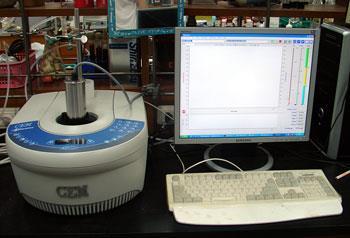 Defying conventional wisdom, new research shows it could be microwaves that promote microwave-assisted reactions, not heat

The counter-argument - that heat is promoting microwave-assisted reactions - was proved in previous research done by another team. Oliver Kappe, from the Christian Doppler Laboratory for Microwave Chemistry in Graz, Austria, carried out a reaction in a microwave-absorbing silicon carbide vial, which prevents microwaves reaching the reactants inside. They screened 18 reactions and got results identical to those from conventional heating.

’We studied Professor Kappe’s work carefully while designing our system,’ says Dudley. A fundamental challenge was to separate the effects of penetrating microwaves from the effects of rapid heating. The silicon carbide vials ingeniously enable rapid heating while blocking microwave penetration, he adds. ’We aimed for the extreme opposite. We wanted to avoid the rapid volumetric heating that is the hallmark of microwave-assisted organic synthesis, while maximising microwave penetration,’ says Dudley.

’This is certainly going to shake up a few things and it’s going to make people think,’ says Nicholas Leadbeater, who studies microwave reactions at Connecticut University in the US. ’These magical microwave effects had essentially been debunked, because scientists had found that they could reproduce results obtained in the microwave conventionally if they did the reaction at exactly the same temperature and time.’

Leadbeater adds that there were some extreme cases where there was a microwave-absorbing reagent in a non-microwave absorbing solvent and sometimes unexplained rate accelerations were being seen. ’But these were the exception rather than the rule,’ he says. In most of those cases, there was a solid catalyst or metal powder in the reaction that was heating up very quickly. ’In this case [Dudley’s work], it’s totally homogeneous and the authors are still claiming that they’ve seen this special microwave effect,’ he says.