Scientists in Brazil have shown that luminescent lanthanide tags can be added to ammunition to enable visual identification of gunshot residue at crime scenes, and even on a shooter’s hands, using an ultraviolet lamp.

Scanning electron microscopy-energy dispersive spectroscopy analysis is currently used to identify some types of gunshot residue, but environmental and occupational contamination can give false negatives. The method is also time-consuming and limited by the need to obtain adequate sample quantities. Another problem is that lead-free ammunition is now coming into use to avoid lead pollution and its resulting impact on human health. (The blood level of lead in shooting instructors, for example, is near the limit set out by the National Institute for Occupational Safety and Health of 60µg lead per 100g blood.) But, this ammunition cannot be unequivocally identified, as the techniques used rely on identifying lead as a characteristic compound in gunshot residue. 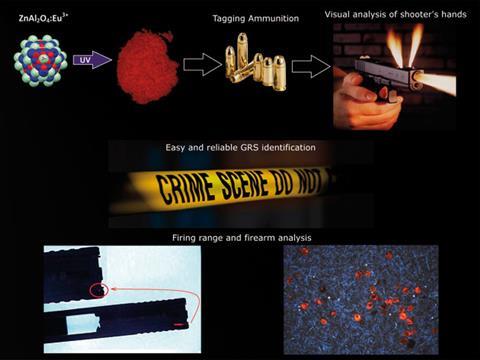 Now, Ingrid Weber from the Universidade de Brasília, and colleagues, have shown that lanthanide-doped ZnAl2O4 acts as an optical marker when added to lead-free ammunition, as it can be seen on surfaces under ultraviolet irradiation. When looking for a suitable marker, the team considered three things: the material must be chemically and thermally resistant (it must not react with gunpowder, the ammunition or the gun); it must be highly luminescent to allow visual identification; and it must not be highly toxic. ‘Lanthanide-doped ZnAl2O4 fits these three criteria and does not present high production costs,’ says Weber.

María López-López, who works on gunshot residue analysis at the University of Alcalá, Spain, thinks the markers are ‘a feasible solution to overcome the drawback that the incoming non-toxic [lead-free] ammunition will create in gunshot residue identification’.

Weber believes that the ammunition process provides an important opportunity to identify gunshot residues. ‘Consider the possibility of producing markers that emit at different wavelengths - it would be possible to distinguish between ammunition for different purposes and, in the future, track the origin of ammunition,’ she says.

López-López agrees that the idea of using luminescent markers that emit at different wavelengths opens a new perspective on ammunition traceability.