Mass spec backpack for chemical analysis on the go

Portable analyser can detect explosives, chemical weapons and drug out in the field 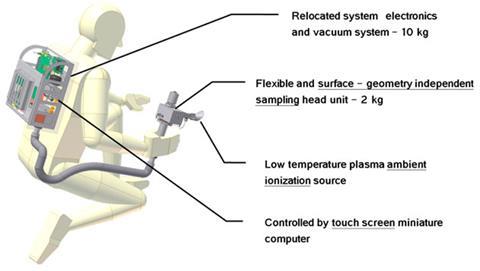 The latest gadget to come out of the labs of Purdue University in the US may look like the fictional ‘proton pack’ from Ghostbusters, but it’s actually a portable mass spectrometer that can be carried around on the user’s back. While it can’t capture an unruly poltergeist, the team who developed it say it could be a useful tool for environmental and forensic monitoring, and have shown it can identify chemical weapons, drugs and explosives.

Most mass spectrometry happens in the lab, but it is often faster, safer and more convenient to measure chemicals onsite. The Mini S backpack was developed by the groups of chemist Graham Cooks and engineer Zheng Ouyang to tackle the problems of speedy analysis in remote or hazardous locations.

‘We’ve been working on portable instrumentation for 20 years, but this instrument is significantly improved over what we’ve done before,’ says Cooks. ‘It’s a first in terms of a wearable mass spectrometer – it’s really meant to be walked around with. It can look at complex mixtures without any prior separations, and gives almost immediate answers.’ 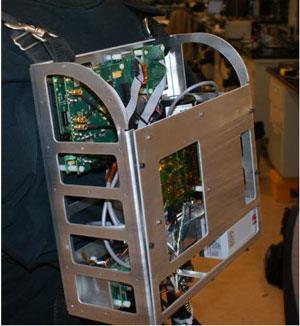 The backpack is connected to a handheld sampling unit, which contains the ionisation source, ion trap and mass analyser. The heavier components – the vacuum system, tablet computer and rechargeable batteries – are all contained in the backpack, which weighs about 10kg. Cooks explains that an ambient ionisation technique called low temperature plasma (LTP) ionisation is used to ionise solid samples on the spot without the need for lab preparation. ‘LTP is particularly good for explosives and chemical agents, which are some of the main targets on which this instrument was tested,’ he says.

The team showed the Mini S could detect trace amounts of explosives such as TNT, the neurotoxin mipafox and illegal drugs, including MDMA and cocaine from different surfaces including skin, glass, cotton and cardboard. And the battery pack on the Mini S can keep it running for an hour and a half.

Inbuilt software also makes the equipment user-friendly for non-specialists, says Cooks. ‘It compares the spectra you are recording against a library of compounds,’ he explains, ‘and you can program it to look for certain ions.’ LEDs on the handheld unit can be made to light up when target substances are detected. ‘It’s really designed to be a “point-and-shoot” device for people that don’t know any mass spec or analytical chemistry,’ Cooks adds.

‘These groups have demonstrated a level of usability never seen before with portable systems,’ says Christopher Mulligan, who works on portable mass spectrometry at Illinois State University in the US. ‘The potential applications are quite intriguing. It is not hard to imagine first responders using such a device to monitor environmental impact of a chemical spill or a field botanist using it to discover new natural products.’