A sensor to gauge garlic strength for the food industry

A sensor to determine the strength of garlic for the food industry has been developed by UK scientists.

’A couple of years ago, we developed a sensor to measure the heat of chilli peppers. In the course of discussions with the food industry, we learned of a similar need for garlic sensing,’ explains Compton. Garlic is widely used to flavour food but varies in strength from species to species, crop to crop and source to source. ’The Moldovan Purple, for example, is much stronger than other varieties,’ he says. Monitoring the strength of garlic purees for use in foods such as sauces and curries is done by human tasters but this is slow and neither reliable nor convenient, he adds.

The sensor works by suspending garlic puree samples in a solution containing bromide ions. The solution is analysed voltammetrically whereby electrogenerated bromine reacts with diallylsulfides to regenerate bromide. This results in an increase in peak current, which quantifies the response. 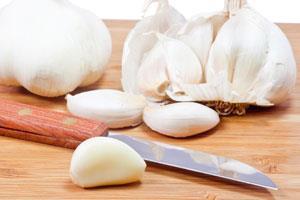 ’It’s interesting that bromine is selective for just the sulfur-sulfur bonds rather than also adding to the abundant carbon-carbon double bonds present in alliin, allicin, diallyl polysulfides and analogous 1-propenyl compounds, all of which are found in garlic preparations,’ says Eric Block, an expert in the chemistry of garlic from the University at Albany, US.

The selectivity arises since the timescale of voltammetric measurements is much shorter than that of conventional synthetic chemistry so that the bromine has time to react with the di-sulfide bonds but not enough to add to the carbon-carbon bonds, explains Compton.

’There is an increasing need for sensors for the environment, in medicine, health care and in industry,’ says Compton. ’Electrochemical analysis is perfect for many analytical applications - for example, amperometric glucose sensor strips have transformed diabetics’ quality of life. Electrochemistry has a major role to play, not least because of its sensitivity and potential for low-cost sensors.’

’Electrochemical techniques are easier to miniaturise and cheaper compared to techniques such as chromatography,’ says Kenneth Ozoemena, who studies electrochemistry and photosensitised reactions at the University of Pretoria in South Africa. ’I am confident that this procedure will revolutionise the quality control of garlic and garlic-containing food.’