Swiss researchers have found that the way methane molecules vibrate when they hit a nickel surface can have a huge effect on their reactivity.

Steam reforming of methane is one of the oldest large-scale industrial chemistry processes, and is used to make syngas; a mixture of hydrogen and carbon monoxide and the starting point for many industrial processes. This process currently produces nearly half of the world’s hydrogen, and as hydrogen is increasingly becoming of interest as a fuel, it is important to be able to make the reaction as efficient as possible by improving the interaction between the metal catalyst used and the methane gas molecules. The activation of the methane C-H bond is the rate-determining step in this process, so understanding this process is key. 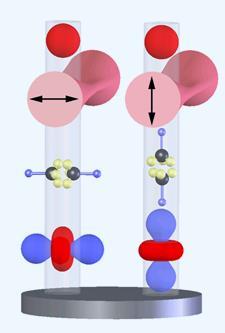 Methane molecules only stick to the surface if their translation and vibrational energy when they hit the surface is enough to overcome the activation energy barrier for this. Scientists know that how the molecules are aligned is important for the collision and subsequent reaction at the surface, but until recently it was only possible to study this in molecules with permanent dipoles, which methane does not have.

Rainer Beck and his colleagues at the Federal Polytechnic School of Lausanne in Switzerland used a powerful new laser to prepare methane molecules in specified energy states. They could dictate both the direction the C-H bonds within the molecules vibrated (parallel or perpendicular to the nickel surface) and the vibrational energy of the molecules.

When the researchers measured how much carbon was deposited at the metal surface after the methane and nickel had reacted, they found that methane molecules that had been vibrating parallel to the surface were up to 60 per cent more reactive than those vibrating at right angles to it.

Geert-Jan Kroes, a theoretician working on similar problems at Leiden University in the Netherlands, believes that the work represents ’a marvellous achievement and poses a big challenge to theoreticians.’ He thinks it may be necessary to use more complicated models than those currently used to explain the new observations.

J?rg Libuda, an expert in reaction kinetics at Erlangen University, Germany, notes that while what Beck and his team observe is ’nice’,  it is only a starting point. ’The challenge is to connect theory and experiment,’ he says, and only when the process is fully understood can it be improved.

Beck says that while he and his team are fundamental scientists working on a basic problem, ’the results of our work could be used to make better theories, leading to more efficient catalysts for the conversion of methane into hydrogen.’