Microscopic magnets could one day brighten up grey-scale magnetic resonance imaging (MRI) scans, according to scientists in the US.

They have developed tiny nickel structures that are specially shaped to create specific signals in narrow radio frequency bands that are picked up by MRI scanners. This could allow different structures in the body - such as blood vessels or tumours - to be lit up in different colours, improving the accuracy of scans.

This discovery represents a radical shift from traditional chemical contrast agents, but is unlikely to take over the market completely. ’Our agent will add functionality that complements existing techniques, rather than replacing them,’ says Gary Zabow, who led the research team at the National Institute of Standards and Technology in Boulder, Colorado, and at the National Institutes of Health in Maryland. 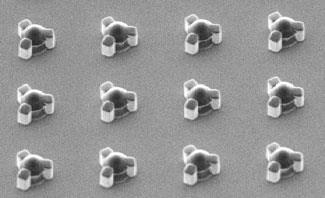 A scanning electron micrograph (SEM) image showing an array of micromagnets, each 3 micrometres across

But, Zabow adds, the technology still has a long way to go. Getting new contrast agents approved for medical use in humans can take up to ten years, and the new agent has yet to be tested in biological systems. In addition, the prototype micro-magnets are made from toxic nickel, although Zabow’s team are confident that the same manufacturing technique can be applied to biologically safer metals such as iron.

MRI scans work by detecting the radio waves emitted by the hydrogen protons in water molecules as they relax from excited magnetic states. The water content of different tissue types, and their chemical and magnetic environments, causes variations in the signal that are ultimately translated into a greyscale image.

Contrast agents, such as chelated gadolinium ions, can be injected to enhance some signals, but this only emphasises the difference between light and dark areas of the image.

Zabow’s micro-magnets consist of two discs of magnetic material, each just a few micrometres across, joined by stalks. Water molecules passing between the discs produce a signal that is highly specific, and much stronger than free water molecules. ’By changing the spacing, size and thickness of the discs, we get unique radiofrequency signals,’ Zabow explains. ’We can easily engineer different shapes of disc to give us a broad spectrum of frequencies - which can be displayed as different colours.’

’If this proves to be sensitive enough it could revolutionise things,’ says Allan Sherry, who designs chemical contrast agents at the University of Texas, in Dallas, US. ’But I don’t think this is going to put any chemists out of business. The advantage of current systems, like small molecule gadolinium, is that they are very safe - they can be injected and are cleared from the body quickly.’

’Larger micro-structures open up a whole new dimension of opportunities,’ Sherry adds, ’but it remains to be seen whether they are safe and can be put to use effectively.’