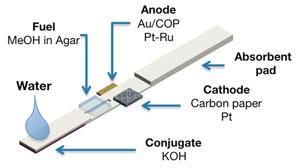 The fuel cell is activated by adding the sample

Instrument-free point-of-care diagnostic devices could be taken to the next level with the development of microfluidic fuel cells on paper.

Paper is cheap, biodegradable, thin and flexible, making it an ideal base material for single-use tests. The paper-based microfluidic fuel cells created by Juan Pablo Esquivel, at the Barcelona Microelectronics Institute of the National Microelectronics Centre, IMB-CNM (CSIC), in Spain, and colleagues, were inspired by the convenience and simplicity of lateral flow test strips – pregnancy tests are probably the most well-known example of these – and take advantage of capillary diffusion to transport reactants without external pumps.

But unlike many commercial lateral flow tests that rely on small button-cell batteries for power, Esquivel’s system does not require an external power source. ‘Paper microfluidics has simplified fluidic handling in portable devices by eliminating the need for pumps. However, many of these devices still rely on external readers to perform a measurement and express the result. The integration of an electrical power source within the same disposable package allows us to run a diagnostic device without any external instrumentation,’ explains Esquivel. 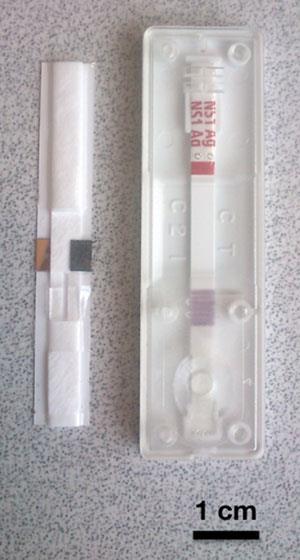 Fuel cells use catalysed electrochemical reactions to convert fuels into electricity. The paper in Esquivel’s system stores both the potassium hydroxide electrolyte and the methanol fuel for the fuel cell but they only mix and generate electricity on the addition of a sample, in this case water. The water dissolves the solid potassium hydroxide, which then flows towards the methanol and electrodes. It means the addition of the sample to be tested could trigger the reaction that generates the power to run a diagnostic device.

Emmanuel Delamarche, a point-of-care device expert at IBM Research in Zurich, Switzerland says the system is very clever. ‘It is the type of work that completely makes sense when you learn about it but that was probably not easy to conceive and implement. In fact, realising an electrochemical reaction using a passive paper device requires a lot of synchronisation between the release and diffusion of reagents with the flow of electrolyte. It is really about timing what chemical goes where and when, without relying on external actuation.’

Delamarche goes on to add that as the power delivered by this fuel cell lasts for a few minutes it is clearly sufficient for quick data capture but may be challenged by tests requiring a more continuous monitoring of biochemical reactions. ‘I guess an obvious next step would be to combine a lateral flow device with a paper-based fuel cell for specific diagnostic tests.’

Esquivel says he used methanol fuel as a proof-of-concept for the paper device but that he is now working on modifications to the electrode catalysts so that they will work with ‘an interesting fuel present in many biological sources’ – glucose.