Microfluidics for the masses

US scientists have developed a series of microfluidic building blocks that allow researchers to construct devices by assembling the components like Lego. 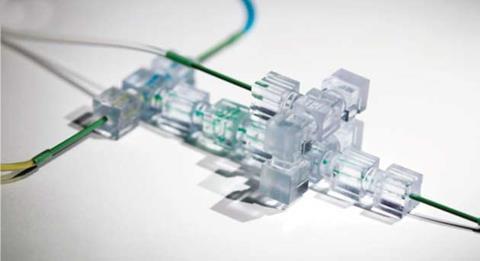 The blocks allow 3D microfluidic devices to be built, and rebuilt, easily

Microfluidic systems, for example lab-on-a-chip devices, are used to handle tiny amounts of fluid for synthesis or diagnostic testing. Similar to the way miniaturised electronics have reduced the space and time needed to carry out calculations, microfluidic circuits can make synthesis and analysis faster and more efficient than macroscale systems. However, the devices are usually fabricated as bespoke, one-piece components, which are costly and can’t be modified once manufactured. Some modular systems are available, but these rely on expensive microfabrication processes, which require a cleanroom and don’t allow a high level of customisation.

Noah Malmstadt and his colleagues from the University of Southern California, US, have now developed a set of building blocks that enable even non-expert researchers to rapidly assemble microfluidic circuits at the bench. Each block performs a different function, such as mixing or splitting and even IR analysis, so a specific circuit can be built simply by assembling the appropriate components. The systems are easy to modify and re-use because ‘[they] are very robust to assembly and disassembly. We’ve taken them apart and put them back together dozens of times in the course of testing,’ Malmstadt says. The block-based system also affords users a third design dimension, rather than the planar confinement of standard, flat devices, which means they use less space and can handle more fluid streams. ‘In two dimensions, you can’t cross streams without mixing them … [in our system] it’s simple to send streams of fluid where they need to be, simply by clicking the blocks together.’

The blocks are 3D printed from a transparent polymer, making their production cheap and fast for anyone with access to a stereolithographic 3D printer. Malmstadt also hopes that making the designs freely available will enable community-driven development: ‘An open source-style development effort will be better at delivering what end users really need,’ he explains.  The team is also working on tools to facilitate design of microfluidic circuits, making their use accessible to a wider audience.

‘This is an exciting development of microfluidics,’ says Joshua Edel from Imperial College London, UK, who is developing analytical microfluidic devices. ‘The field is at the stage where, for example, biologists and biochemists, and even the medical community want to use these platforms. This [system] opens up the possibility of such non-experts using the technology.’