Milking the benefits of multiple biomarkers 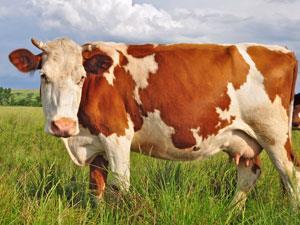 An illegal hormone used to promote milk production could soon be easy to detect in dairy herds, thanks to scientists in the Netherlands.

The hormone - recombinant bovine somatotropin (rbST) - is licensed in some countries, but, despite having no influence on human health, its use is banned in Europe due to concerns over the health and welfare of treated animals.

The direct detection of rbST is hindered by its similarity to the natural growth hormone produced by the animals, bST. Its blood serum concentration fluctuates significantly, and both bST and rbST are present at low concentrations. Measurements by methods such as liquid chromatography–mass spectrometry also suffer from a small detection window because of the short half-life of rbST in the blood.

Now, Nathalie Smits and her team at Wageningen University have developed a highly sensitive method to screen dairy cows for the hormone. They use serum samples from the cows and screen for three biomarkers that are produced at a higher concentration as a response to rbST use. These are insulin-like growth factor-1, its binding protein and rbST-induced antibodies.

The team’s technique involves taking simultaneous measurements of the three biomarkers by flow cytometry (a laser based method to detect biomarkers by suspending them in a stream of fluid and passing them by an electronic detection apparatus). Smits labelled a set of polymer microspheres for each of the three markers. ‘The microsphere beads are labelled with fluorescent secondary antibodies,’ explains Xiaoxiang Zhang, National Institutes of Health, US, an expert on flow cytometry and fluorescence probes for biomarker imaging. After their simultaneous incubation with a serum sample, ‘flow cytometry can identify different sets of microsphere beads and measure the fluorescence’. The fluorescence intensity for each microsphere set is proportional to the concentration of that biomarker. As all three biomarkers are measured in a single experiment, material and sample usage are minimised.

‘We focused on the subsequent cascade reaction of rbST action,’ says Smits, which has a strong influence on the serum levels of the three biomarkers. Two of the markers show a rapid response to rbST treatment while the other (the antibodies) has a long half-life, resulting in a prolonged detection window.

By analysing samples at different time points after rbST treatment, they produced a specific biomarker profile for comparison with the profile of an untreated cow population.

Smits’s team is also keen to screen milk for rbST use, because a single sample of tank milk could identify an entire dairy treating with the hormone.