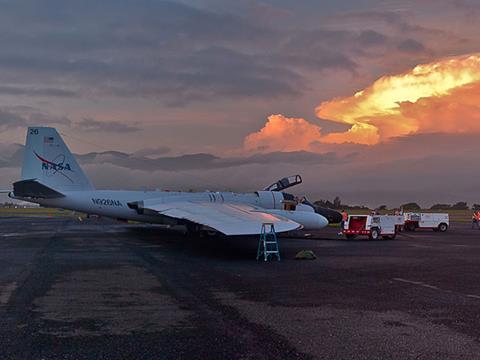 Relatively little is understood about the formation of cirrus clouds, wispy ‘horsetails’ that are made of ice crystals and form at extremely high altitudes – several kilometres above the Earth’s surface. A team led by Daniel Cziczo, at the Massachusetts Institute of Technology (MIT) in the US, flew into cirrus clouds in a special research aircraft kitted out with a bespoke device for collecting samples of ice crystals.1 Because the team was interested only in the particles around which the ice crystals nucleate and not other, extraneous matter that might be within the cloud, they developed a sampler that resembles a hair dryer. Air is blown out of the sampling aperture so that only the heavier ice crystals can pass through. Less dense particles cannot force their way in. As the crystals enter the collector, warm air sublimates the ice, releasing the particle around which the ice condensed. These particles were subjected to mass spectrometry and then examined back in the lab with an electron microscope.

‘For most clouds, nucleation occurs around small aqueous droplets containing sulfates or organics,’ says Cziczo. ‘But in our samples the ice nucleation occurred mainly around particles of mineral dust, with some metallic particles. This is unusual because these particles are relatively rare in the atmosphere.’ Mineral dust is a natural component of the Earth’s surface, but more is being released by intensive agriculture and activities such as deforestation. The metallic particles arise directly from industrial activity such as combustion processes.

‘Our results should help us get a clearer idea of how these poorly understood clouds form,’ says Cziczo. ‘If we can get an inventory of these particles in the atmosphere, we can better predict how and where these high altitude cirrus clouds will form, and this can feed into the climate models.’

Dust in the wind 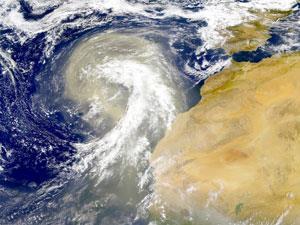 Mineral dust is released by intensive agriculture and industrial processes. It is responsible for the formation of cirrus clouds

Meanwhile, Eliza Harris of the Max Planck Institute for Chemistry, Germany, and colleagues have shown that the widely accepted mechanism for the oxidation of sulfur dioxide to sulfate within clouds is almost certainly wrong.2 This is important because the sulfate content of clouds is believed to make a key contribution to the cooling effects of clouds by both increasing cloud formation and scattering light. It is known that SO2 in the atmosphere is oxidised in clouds. Nearly all models assume that this oxidation is carried out by peroxide, which in turn arises from hydroxide radicals formed by photochemical reactions. However, an alternative oxidation mechanism is catalytic activity of transition metal ions contained within mineral dust particles.

The two pathways favour different isotopes of sulfur. Harris’ team measured the isotope ratios of sulfur in atmospheric SO2 entering a hilltop cloud. The researchers were able to show that the particular isotope of sulfur that is consumed by the metal ion catalysed route was effectively stripped away within the cloud – indicating that this mechanism of oxidation was the dominant one, not peroxide.

‘Because peroxide has a very different distribution across the globe to mineral dust, the models predict that SO2 is oxidised in completely different places,’ says Harris. ‘Also, because the reaction takes place on large particles, these fall out of the cloud very quickly, so the sulfate will not remain in the cloud for as long as previously thought, reducing its influence. This suggests that the cooling effect of sulfate is much less than we thought.’

Commenting on Harris’s work, Cziczo says: ‘The study has some very interesting overlaps with our work. They show that the models are incorrect because the chemistry is incorrect. We are both finding new things that will hopefully result in better predictive models.’

Harris, who has herself since moved to MIT, says: ‘It is interesting that both our work and Cziczo’s has come out at exactly the same time, with both showing the importance of mineral dust. The models currently don’t have a good handle on how active and important mineral dust is in the climate, and hopefully these studies will help.’