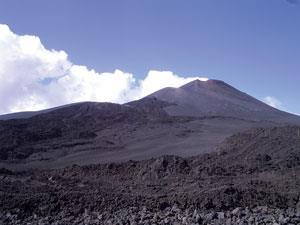 Scientists in Italy have found that the surfaces of lava stones from Mount Etna, in Sicily, may be leaching manganese into the environment. Almost 1.5 million people are supplied with water from Etna’s wells and these findings could help identify any health risks associated with using this water.

The origins of elevated occurrences of some health problems in the population around Europe's tallest and most active volcano have been debated for many years. Reports have shown that levels of Parkinson’s disease in the area are well above average and doctors have been unable to rationalise these numbers.

Parkinson’s is a neurological disease where nerve cells in the brain gradually die, leading to tremors, rigidity and other symptoms, which get worse over time. The cause of Parkinson’s is not understood but it has been linked to environmental factors such as pollution.

Groundwater from Etna’s wells has been found to contain very high levels of some potentially toxic elements. Water samples collected in 2010 had manganese concentrations up to 2600µg/l – Italian legislation states it should be no higher than 50µg/l.

Antonino Gulino and colleagues, at the University of Catania, have investigated a possible origin of the groundwater pollution. They used x-ray photoelectron spectroscopy (XPS) to characterise the surface composition of lava stones emitted from Mount Etna during activity in April 2012.

XPS involves firing x-rays at a material and measuring the electrons subsequently released from its surface layers, down to a depth of a few nanometres. Previous techniques used to study lava stones have only been capable of studying the bulk composition. XPS allowed the team to differentiate between elements in the surface and elements in the bulk. Analysing the surface of the stones is important as this is what will gradually erode and dissipate into the environment. 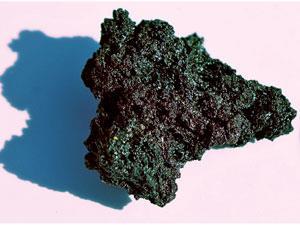 Example of a solidified lava fragment analysed for the study

The XPS surface results were compared with results from x-ray analysis of the bulk. Significantly lower amounts of silicon, iron, calcium and potassium, and higher amounts of aluminium, sodium and phosphorus were found on the surface than in the bulk. Remarkably, the value of surface manganese was found to be more than twice that in the bulk. This may explain why the concentration of manganese in Etna’s wells is so high.

Chronic exposure to manganese can cause manganism. Symptoms include impaired motor skills and tremors, but these are also typical of Parkinson’s disease. The team suggests that their surface analysis provides evidence that some of the Parkinson’s cases in east Sicily may actually be misdiagnosed manganism. ‘I hope that our paper could be a seed for similar studies and that scientists do not assume bulk studies of magmatic materials are sufficient to fully investigate their health implications,’ says Gulino.

Emmanuel Guillon, an environmental chemistry expert at the University of Reims Champagne-Ardenne, France, says that groundwater could be treated before it is delivered to communities surrounding volcanos. He hopes that Gulino’s approach will help to identify elements and compounds that need to be eliminated during drinking water provision.

The team now intend to collect air samples to determine the gases that are released, and potentially inhaled, during volcanic activity.