Physical chemists have developed a technique that could improve the efficacy and reduce side effects of a common cancer drug.

Physical chemists have developed a technique that could improve the efficacy and reduce the side effects of a common anticancer drug.

Grant Collins and colleagues at the University of New South Wales, Australia, have shown that cucurbiturils, which are barrel-shaped molecules, could be used as hosts for the pharmacological delivery of a common anticancer treatment containing platinum. 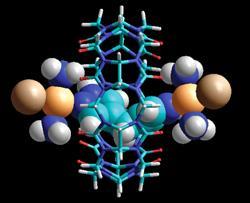 cisplatin bound in the cucurbituril cavity

The platinum complex cisplatin is used widely in the treatment of cancer. The uses of cisplatin are however limited by natural and acquired resistance to the drug, and by its side effects which limit the size of the dosage. Multinuclear platinum complexes display novel DNA binding modes and this feature allows them to overcome problems of resistance.  These complexes may be active at lower concentrations than cisplatin; however they also show greater toxicity and may be degraded before they reach their intracellular targets.

The cucurbiturils used by Collins’ team can encapsulate multinuclear platinum complexes and potentially act as drug delivery systems. By encapsulating these drugs, the toxicity may be reduced, and degradation within the body is prevented.

"the rate of release of a multinuclear platinum complex can be tailored through selecting a certain size of cucurbituril"
Cucurbiturils have hydrophobic internal cavities which can encapsulate the aliphatic or aromatic linking ligands of multinuclear platinum drugs. The oxygen rimmed portals can stabilise encapsulated complexes though interactions with platinum ammine groups and may prevent degradation by sterically hindering attack from biological nucleophiles.

NMR spectroscopy and molecular modelling studies by Collins and his team has shown that the rate of release of a multinuclear platinum complex can be tailored through selecting a certain size of cucurbituril. Larger cucurbiturils also offer greater protection for the platinum complexes.

Understanding the nature of the binding within the cucurbiturils is vital for the design of these host molecules. The researchers suggest that cucurbiturils have the potential to act as efficient and tailorable drug delivery systems for use in the fight against cancer.