A new type of catalyst made by attaching platinum nanoparticles to nitrogen-doped carbon nanotubes could be used to oxidise methanol in fuel cells, thanks to work by Chinese chemists.

Carbon nanotubes (CNTs) are normally difficult to modify because they’re chemically unreactive. But replacing some of the carbon atoms with nitrogen creates sites for potential chemical modifications and transforms the tubes into metallic conductors. 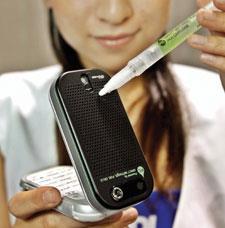 The group, led by Hu Zheng at Nanjing University, deposited platinum nanoparticles (3-9nm across) on the surface of such nitrogen-doped CNTs using a solution of hexachloroplatinic acid in ethylene glycol.

When they examined the resulting products under an electron microscope, they found that the nanoparticles were homogeneously distributed on the tubes and strongly anchored, which would not be the case had they used undoped CNTs.

As nitrogen-doped CNTs conduct electricity and finely dispersed platinum is known to be a good catalyst, the Nanjing researchers thought their nanotubes might be suitable for use in electrochemical applications such as fuel cells.

To test the activity of the platinum-coated nanotubes, the team looked at the oxidation of methanol to carbon dioxide - a reaction that takes place at the anode of a methanol fuel cell. They found the nanotubes had significant catalytic activity and suggest they could be used in fuel cells in the future.

Gregory Dolan, vice president of the Methanol Institute at Arlington, Virginia, welcomed the advance. ’The world’s major consumer electronics manufacturers are all in a race to bring micro fuel cells to the marketplace,’ he told Chemistry World. ’It is cutting-edge research like this to boost the efficiency of direct methanol fuel cells, while ultimately reducing costs, that will help bring the finish line even closer.’