Researchers have combined thousands of snapshots of the barrel-shaped protein GroEL to create a series of films that follow its movement and binding events. This work helps to explain the role the protein takes in correctly folding up newly-made proteins.

Early work in the field showed that folding helpers, like the classic model system GroEL from Escherichia coli, are neither catalysts nor structural scaffolds. They enable proteins to adopt their correct conformation simply by binding incorrect conformations, releasing them into a shielded environment, and binding again if necessary.

GroEL is a barrel-shaped complex made of 14 identical protein molecules organised in two rings of seven. Each ring provides a shielded interior space for substrate proteins, especially when covered with the matching lid made of seven copies of the protein GroES. Structural analyses had shown that each ring of seven GroEL subunits can adopt drastically different conformations depending on its functional state and the presence or absence of binding partners such as the substrate protein, the energy carrier ATP and the GroES lid. 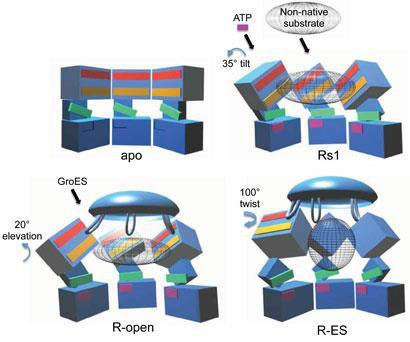 Now, Helen Saibil at Birkbeck, University of London, UK, and co-workers have followed up their long-running structural work on molecular chaperones using electron microscopy at very low temperatures to create a large number of snapshots of GroEL-ATP complexes. These movies plausibly show which of the seven subunits of each ring tilt, expand and twist to change their shapes during the functional cycle of the molecular chaperone.

’The movements we see in the videos suggest how the subunits can first bind the protein inside the cavity, potentially stretch it to undo incorrectly folded molecules, and then release it to allow it to find its own structure in the aqueous environment inside the cavity, while at the same time binding the GroES lid to prevent its premature escape,’ Saibil explains. ’If the protein still displays hydrophobic patches after it is released from the chaperone, it will bind to a new GroEL ring and run through the cycle again. Once it is correctly folded it will be stable in the cell environment and will carry out its biological function.’

Manajit Hayer-Hartl and Ulrich Hartl, who have jointly investigated GroEL and other chaperones at the Max-Planck Institute for Biochemistry in Germany for many years, both welcomed the research. ’It confirms the saying that a picture is worth a thousand words,’ Hayer-Hartl says. ’For those of us who have been studying the mechanism by which the GroEL/ES chaperonin system promotes protein folding, it is truly rewarding to see the movements of this fantastic machine in detail. It takes on a new reality.’