A remarkable molecular gearbox with potential applications in nanoscience and smart materials has been developed.

A remarkable molecular gearbox with potential applications in nanoscience and smart materials has been developed by Ben Feringa and co-workers from the University of Groningen, the Netherlands.

"In the future, this work will lead to the construction of motors integrating several functions as a first step towards molecular machines. "

They have made an artificial molecular motor in which controlled movement in one part directly influences the motion of the second part. This device is called a molecular gearbox because the upper propeller part of the molecule controls the speed of the lower rotor part, functioning like a gearbox in a vehicle. Selection of the conformation of the propeller part was achieved by irradiation and heating. For all four orientations, both stable and unstable cis and trans states, different rates of rotation were achieved for the rotor. 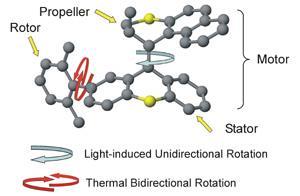 Having taken the first step towards the coupling of rotary motion and motor functions, the group’s next aim is to exert more control over the system and achieve greater effects. Currently, only the direction of the light drive motor can be controlled. Once power over the direction of the second rotor motion is achieved, Feringa and his team have high hopes of building a real gear so that different rates of rotation of each part can be used to either speed up or slow the motion of the second rotor part.

In the future, this work will lead to the construction of motors integrating several functions as a first step towards molecular machines. ’At the molecular level this will be extremely challenging as all the components will have to work properly,’ said Feringa.