US researchers have gleaned new insights into the formation of methane-rich hydrates found in the deep ocean. The work could help scientists gain control over the growth of hydrates, which block oil and gas pipelines but are also potential hosts for gas storage.

Gas hydrates, also known as clathrates, are formed in low temperature, high pressure environments. Under these conditions, water adopts a crystalline structure different to that seen in ice - the hydrogen and oxygen atoms build ’cages’ that host guest molecules, like methane.

The new study, by researchers at the Colorado School of Mines in Golden, US, uses computer simulations to predict how methane hydrates nucleate and grow in the first microseconds of formation. This apparently short simulation timescale is actually an extension of over two orders of magnitude compared to previous studies. 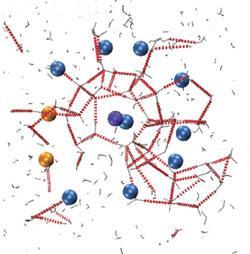 According to one of the authors, Amadeu Sum, the results - a series of molecular level ’snapshots’ - are intriguing. ’What has been really surprising to us is the intimate interaction that methane has with water,’ he says. ’When the first few nucleus traces of hydrates are forming, it is amazing how methane orders in solution.’
Sum’s snapshots show the molecules cooperating to form a stable ring built from five water molecules, with two methane molecules stuck to opposite sides. This leads, by around a microsecond, to the formation of the first small cages, each made of 12 pentagons and housing a methane molecule at its centre. These early cages eventually give way to cages that make up the hydrate crystals, although the researchers suggest they might act temporarily as a kind of glue between the two dominant crystal structures.

The discovery of large oceanic methane hydrate deposits worldwide means the research has implications for climate change - not only is methane a particularly potent greenhouse gas, there are also suggestions that hydrates could be used to store CO2. But Sum is just as interested in impacts on flow assurance in oil and gas pipes. ’There needs to be control over formation of hydrates in that environment and it’s critical to understand how the water and gas molecules come together to form the hydrates that often plug the pipelines,’ he says.

Ross Anderson, a gas hydrates researcher at Heriot-Watt University in Edinburgh, says the study marks a step forward in simulations of hydrate formation, but is sceptical about its impact on hydrate research generally. ’There are lots of real-world problems associated with hydrates that need solving,’ he says. ’As far as I am aware, such molecular simulations have never really helped significantly with any of these - instead they just give little bits of information about what "might" be going on.’