More data from mixtures via NMR

Finnish scientists have developed a new technique for separating out the NMR spectra of compounds in a mixture. They say their method, which applies to a wide range of organic molecules, could help chemists quickly analyse the products of their reactions and, potentially, in studying extracts of natural products.

’The main reason we started thinking about this particular experiment was that it would be nice to get the NMR spectrum of your product without any purifying step,’ says Sami Heikkinen, who led the team at the University of Helsinki. ’But basically, for anything that requires liquid chromatographic separation, you might use this approach as well.’

Heikkinen and colleagues developed their approach as an improvement to the already widely used diffusion ordered spectroscopy or ’DOSY’ technique, which separates compounds in an NMR sample according to their diffusion rates. The problem with DOSY is that it often produces spectra with overlapping peaks, making the signals from the various compounds in the mixture difficult to differentiate.

By adding one extra component during preparation of NMR samples - the polymer polyvinylpyrrolidone (PVP) - the team were able to slow down the diffusion rates of different compounds in a sample mixture, resulting in spectra with more widely spaced peaks. The inexpensive, commercially available polymer works like a chromatographic stationary phase, hydrogen bonding most strongly to the most polar compounds in a mixture, increasing the difference in diffusion rate between polar and non-polar compounds. 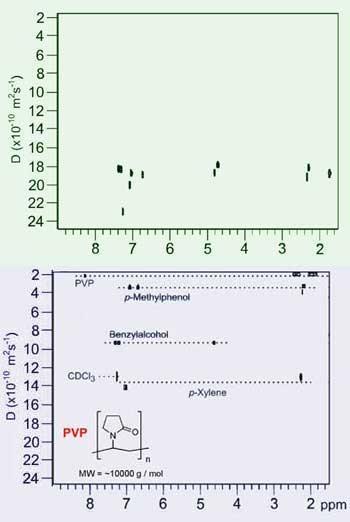 The same reaction mixture, without (top) and with PVP

Craig Butts, an NMR expert at the University of Bristol, says the approach is straightforward and goes some way towards solving a problem that few have so far tried to tackle. Whilst other groups have attempted to separate out DOSY NMR spectra in the horizontal direction, Heikkinen’s work focuses instead on the vertical direction.

’Whether this particular compound, applied in this particular way, is the perfect way to do it, I suspect that’s not true,’ says Butts. ’But certainly it’s really nice evidence that you can get better data from this technique.’

The new approach could help organic chemists monitor reactions more effectively by allowing them to obtain better data from reaction mixture samples. Although it won’t apply to all compounds - hydrocarbons without any functional groups, for example, can’t form hydrogen bonds with PVP - Heikkinen says it works for a broad range of molecules. He adds that it could also have applications for non-synthetic mixtures. ’We don’t know yet if this works, but if you have some extract from natural products, in that sense it could be useful too.’