Movies of molecules in 4D

Movies of carbon nanotube bracelets showing their response over time to an external trigger have been recorded enabling greater understanding of not only the 3D structure of the nanotubes, but of how they react and move, say scientists in the US. 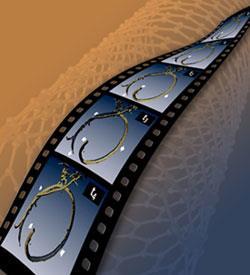 The benefit of seeing something in 3D is that it is more realistic, enabling us to obtain more information about the object and its surroundings. Scientists have been using electron tomography - a technique for obtaining detailed static 3D structures of molecules or even viruses and cells - for some time. However, until now, the technique has given no information on how a molecule responds after a reaction has taken place.

Ahmed Zewail and coworkers at the California Institute of Technology have taken electron tomography into the fourth dimension (4D) by observing the 3D dynamics of carbon nanotubes over time after they were exposed to pulses of heat from a laser. The technique is very fast, enabling nanometer scale molecules to be recorded on the femtosecond timescale.

The team constructed tomographs from nearly 4000 projections taken from a whole series of angles and times. These were then displayed as a movie showing the mechanical motions and shape changes of the molecules. The motions included ’breathing’ due to bending, and wiggling of the bracelet around a tethered position.

The approach ’promises to have wide-ranging applications in materials and biological sciences,’ say the researchers.

’This is a beautiful technique that they have developed,’ says Alexandra Porter, an expert in electron tomography from Imperial College London, UK. In the future, it could be used to study the growth of nanowire structures over time in 3D and the mechanism of protein folding, she explains.

However, ’the main limitation is radiation damage, because the sample is under the [laser] beam for a long time, which is a real problem for biological structures - bioimaging in particular,’ Porter tells Chemistry World.

Zewail counters that ’the radiation is not on for a long time - it is ultrashort pulses’ and should therefore keep radiation damage to a minimum. He hopes that in the future the 4D movies will allow the team to map the microscopic forces involved when nanotubes or other similar materials move over time, by comparison with computer simulations of mechanical motions.