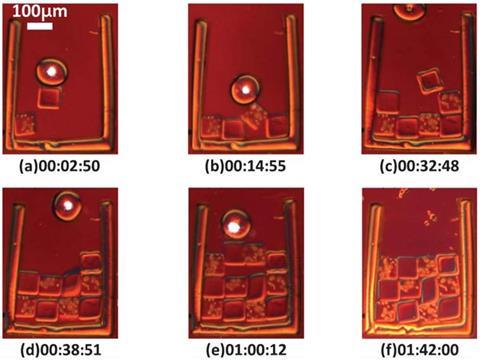 Microrobots smaller than the width of a human hair have been directed to assemble patterns made of single yeast cells and cell-laden agarose microgels using cavitation bubbles by a team from Hawaii. The robots could be used to push cells together to grow artificial tissue.

There have been a number of different methods used to manipulate single cells into patterns; including micromanipulators, which physically trap and hold cells but need skilled technicians to use them; and optical tweezers, which can be automated but usually need strong lasers or electrical fields that can affect the cells.

Microrobots can physically manipulate cells, whilst being controlled remotely, and they have very little effect on the cells themselves. In their research, Aaron Ohta and his colleagues from the University of Hawaii at Manoa, have shown that hydrogel microrobots made out of poly(ethylene glycol) diacrylate (PEGDA) can be used to assemble cells for culturing purposes. ‘The microrobots are made of a hydrogel, jello (jelly)-like material, making capable the gentle assembling of small objects like single cells. The microrobots could be used to organise cells into tissues that can grow outside of the body,’ says Ohta.

Movement is generated by a laser pulse, which creates a gas bubble in an aqueous medium. The temperature gradient at the bubble’s surface causes a thermocapillary flow that has two main components: vertical and parallel. The vertical component floats the bubble and microrobot above the substrate. The parallel component causes the bubble, and the microrobot above it, to centre itself over the laser point. If the laser spot is moved, the bubble follows.

'I think this is a very interesting paper and brings a new direction to the use of robots,’ comments Utkan Demirci, who is involved in research in microfluidics and microelectromechanical systems at Harvard University Medical School, Brigham and Women's Hospital (BWH), and Massachusetts Institute of Technology, US. ‘I feel it will have various applications as an interesting mechanism for manipulating cells in microscale systems.’

The next step is to get multiple microrobots working together, says Ohta. ‘The microrobots are controlled with lasers, so it can be possible to control many microrobots at once, and programme them to work together as a team. This will make it easier and faster to accomplish complicated micro-assembly tasks, such as creating artificial tissues and organs in a laboratory setting.’