Nano-hype comes out in the wash

Landmark ruling was prompted not by a washing machine

’EPA to regulate nanotechnology for the first time’, the headlines blared. What’s more, the so-called landmark ruling, widely reported in late November, was prompted not by a new drug delivery system, or fictional nanobots - but by a washing machine.

The intent of the US Environmental Protection Agency was widely applauded, but as experts pointed out, their task seemed impossible. With nanotoxicology research still in its infancy, and no defined protocols for manufacturers to follow, it was unclear how any regulations would work in practice. 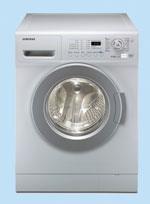 The spur for the EPA’s actions, revealed on 22 November, were the antimicrobial silver ions produced inside the Samsung ’Silver Wash’ washing machine. Each machine contains a silver plate that is slowly electrolysed to release the cleansing ions.

The EPA had reclassified the machine’s silver ions as a pesticide, because they might concentrate in waste water treatment plants, killing bacteria intended to detoxify the wastewater. Hence the washing machine - now containing a pesticide - had to be registered and tested under the US Federal insecticide, fungicide and rodenticide act (Fifra).

But since Samsung’s own marketing blurb highlighted the benefits of their ’silver nano particles’, experts suggested that other products which definitely do contain antimicrobial silver nanoparticles - socks, air-fresheners, food-storage containers - might subsequently fall under the EPA’s ’pesticide’ label, and have to undergo tests to show they would not damage the environment.

This meant that the EPA’s move was billed as the first time that American authorities had moved to regulate the burgeoning nanotechnology industry.

But Chemistry World has learned that manufacturers will not have to answer searching questions about toxic effects specific to the small size or shape of their silver particles; the real concern of those who want to regulate nanotechnology. Jim Jones, director of the EPA’s Office of Pesticide Programs, confirmed that only standard protocols relating to the known aquatic toxicity of silver would be tested (for example, a product’s levels of silver exposure). The extra ’nano’ effects of any nanosilver product would not be tested for - nor did the EPA know how to do it. ’We haven’t figured that out. No regulatory authority has figured that out,’ Jones told Chemistry World.

The problem for the EPA and other regulators is that when it comes to the specific toxicity of nanoparticles, ’we don’t really have the science to prove anything one way or another,’ as Tim Harper, CEO of nanotechnology consultants Cientifica, put it. Some basic research is being done (see Chemistry World, November 2006, p58), with the US government claiming to spend around $40 million (?20.3 million) a year on studies of nanoparticle risks. But US investment, thrown out to individual research groups, is not following any kind of overall targeted strategy, according to Andrew Maynard, chief science adviser with the US-based Project on Emerging Nanotechnologies. And while the UK is taking a more integrated approach, progress is painfully slow (see Chemistry World, August 2006, p2).

On 16 November, Maynard and colleagues published a Nature paper challenging the scientific community to develop authoritative information on the risks of nanoparticles. But as consumer groups press for regulation of a commercial market already worth a reported $32 billion (?16.2 billion), regulatory bodies like the EPA are searching for immediate options. A total ban is considered inconceivable, while an expensive ’nanohazard’ labelling program may ultimately be meaningless.

In Maynard’s view, regulations might still be usefully developed, even with our incomplete knowledge of nanoparticle risks. The existing regulatory framework could be applied to nanomaterials, he suggests, so long as questions are asked that highlight nano aspects.

For example, the city council of Berkeley, California, passed a city ordinance on 12 December (which is also being claimed as the first nanoparticle regulation), amending existing health and safety rules to demand a full toxicological report from all facilities manufacturing nanoparticles. However, Nabil Al Hadithy, secretary of the council’s Community Environmental Advisory Commission, told Chemistry World that he expected these reports to be literature reviews of toxicology data about the class of nanoparticles in question, rather than a summary of specific in-house tests conducted by the manufacturers. Since relatively little research on nanoparticle toxicology exists to be reviewed, the regulation - however welcome in principle - will have only a limited practical effect. Al Hadithy described the ordinance as a precautionary measure.

For now, the nanotechnology market is still waiting for comprehensive nano-specific regulation. But aside from scientific uncertainties, another problem is the incessant ’nano’ hype attached to every new product. As David Berube, communications director of the International Council on Nanotechnology, commented to Chemistry World: ’If Samsung hadn’t been so insistent on calling it nanosilver, this publicity would never have happened.’