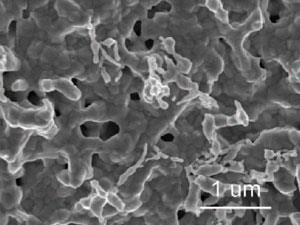 A new type of nanocrystalline copper electrode that catalyses the electrochemical conversion of carbon monoxide to alcohols has been demonstrated by researchers in the US. The scientists hope the research may in future provide a means of storing energy from intermittent renewable sources and make carbon capture techniques more economically viable.

Several electrochemical catalysts can reduce carbon dioxide to carbon monoxide, but this is a poor fuel because it is a gas, has a low energy density and is toxic. Reducing carbon monoxide further to produce liquid fuels, such as alcohols, however, is more difficult. Several catalytic processes have been devised that can produce alcohols by combining carbon monoxide with hydrogen, but industrial hydrogen is produced from fossil fuels.

Reducing carbon monoxide to alcohols electrochemically using just water as the hydrogen source is a key goal for fuel scientists. This reaction is catalysed by copper, so in principle all you need is a copper electrode. In practice, however, the majority of the hydrogen from the water is evolved as a gas, rather than reducing the carbon monoxide.

Matthew Kanan and colleagues at Stanford University and Lawrence Berkeley National Laboratory compared the results obtained using a standard copper foil electrode with those using nanocrystalline copper electrodes. They looked at both commercial nanoparticle electrodes, which had been produced by rapidly vaporising bulk copper before cooling it to form isolated nanoparticles, and electrodes they produced themselves by oxidising copper foil and reducing the oxide.

Like the standard foil electrode, only 5% of the hydrogen produced by the commercial nanoparticle electrodes went to reducing carbon monoxide. By contrast, the oxide-derived electrodes were much more effective at reducing carbon monoxide, with about 50% of the product being a mixture of ethanol, acetate, ethylene and propanol. The researchers suspect the explanation lies in the grain boundaries between nanoparticles in their electrode. ‘The grain boundary terminates at the surface and at that surface termination you can have a different structure that wouldn't be stable on the normal surface of a particle,’ explains Kanan. The team is now working to map the grain boundaries with atomic precision in the hope that theoretical chemists will then be able to work out exactly how carbon monoxide reduction takes place there.

‘I really like this work,’ says electrochemist Marc Koper of Leiden University in the Netherlands. He cautions that it is ‘very far from an industrial process’ and says that there will be ‘many practical problems to overcome’ but he concludes ‘for me, the fact that you can demonstrate the feasibility of doing this is the main significant advance’.