The conversion of carbon dioxide to long-chain hydrocarbons is potentially crucial to the production of renewable fuels. Now, two separate research groups in China have developed multifunctional catalysts that can convert CO2 and hydrogen to gasoline, which comprises hydrocarbons with chain lengths between five and 11 carbon atoms.

Various processes can convert CO2 to hydrocarbons, but they usually produce volatile single-carbon hydrocarbons such as methane and methanol. Building carbon–carbon bonds to produce longer chain, liquid hydrocarbons is a significant challenge. Recently, however, researchers have shown that zeolites can catalyse the conversion of methanol to gasoline at high temperatures.

One group at Shanghai Advanced Research Institute in China produced a bifunctional catalyst combining pellets of partially-reduced indium oxide, which converts CO2 and hydrogen to methanol, in a mixed bed with pellets of H-form Zeolite Socony Mobil-5 (HZSM-5) to convert the methanol to long-chain hydrocarbons.1 The catalyst currently favoured in industry for methanol production from CO2 and hydrogen is a mixture of copper and zinc oxides supported on alumina, and the researchers tried combining this and other catalysts with the zeolite. However, the other catalysts caused the production of large quantities of carbon monoxide via the reverse water-gas shift reaction; this competed with methanol production and, at the high temperatures necessary for the zeolite to convert methanol to gasoline, the selectivity for carbon monoxide reached 97%. Indium oxide, however, catalyses the reverse water-gas shift reaction less effectively, resulting in more methanol, which can then be converted to long-chain hydrocarbons by the zeolite. 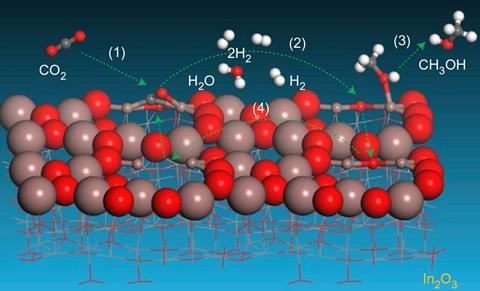 The Shanghai group used an indium oxide catalyst to convert CO2 to methanol, which is then converted to gasoline via a zeolite

In contrast, researchers at Dalian Institute for Chemical Physics combined HZSM-5 zeolite with partially-reduced magnetite, which strongly promotes the reverse water-gas shift, producing more carbon monoxide. When the magnetite is exposed to the reaction atmosphere, some of the Fe3O4 sites are converted to Fe5C2 sites, which catalyse the Fischer-Tropsch synthesis – converting the carbon monoxide to α-olefins. Like methanol, these react to form long-chain hydrocarbons in the presence of HZSM-5 zeolite.2

The Shanghai researchers achieved conversion of 13% of CO2 to hydrocarbons, whereas the Dalian group achieved 22% conversion. Both groups found that around 78% of the hydrocarbons produced contained at least five carbon atoms. The reactions presented here are exothermic: the energy needed to reduce the CO2 comes from the hydrogen. ‘One way to do this,’ explains Shenggang Li of the Shanghai team, ‘would be to use, for example, solar energy to obtain electricity, and then to use the electricity to obtain hydrogen.’

Edman Tsang of the University of Oxford, UK, comments that both developments have come at a good time. ‘When everybody’s very interested in how to deal with carbon emissions, I think it’s pretty useful to have a direct conversion of CO2 to gasoline,’ he says. He adds that one clear benefit of integrating sequential reactions like these is that continuous removal of an intermediate such as methanol shifts the chemical equilibrium in favour of its production. He cautions, however, that the conditions for each reaction cannot be optimised individually, and notes that neither paper addresses the challenge of renewable hydrogen production. ‘The electrolyser is a very expensive way to produce hydrogen from water,’ he says, ‘and at present that’s the biggest obstacle to using renewable hydrogen for clever chemistry such as this.’