Nanoear listens in on cellular motoring

Just as the macroscopic world is filled with the rattle and hum of machinery, the actions of molecular and cellular machinery also produce tiny vibrations that resonate throughout the microscopic world. The sound a car engine makes can indicate if there’s a fault and by extension the sounds made by the machines that control cells could also provide useful information about the processes they control. Listening to these sounds, however, is currently beyond even the keenest ears. 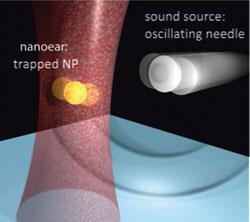 Inspired by this, Jochen Feldmann and colleagues at the Ludwig Maximilian University of Munich have developed a ’nanoear’, that is capable of detecting these tiny vibrations. Feldmann’s nanoear is an adaptation of optical tweezers: a technique that uses laser beams to trap an object within a fixed volume of space, commonly used to manipulate objects and perform measurements at the microscale and nanoscale.

On observing the movements of such a trapped particle, Feldmann proposed that the particle’s response to an acoustic wave should reliably correspond to features of the wave. ’Imagine an apple hanging on a branch of an apple tree and being shaken by wind,’ explains Feldmann. ’By observing the apple’s motion one could derive properties of the wind.’

To test this, the team used a camera to record the movement of an optically-trapped gold nanoparticle in the presence of a sound source. Using a Fourier transform, they were able to disentangle the motion caused by the sound waves from that of normal Brownian motion. The result, says Feldmann, is ’a highly sensitive acoustic detector that provides a very local source of information about the microworld’.

Feldmann says that the nanoear could be useful in studying cellular processes. Gail McConnell, a research fellow in biophotonics at the University of Strathclyde, UK, agrees. ’It would be marvellous if mutants of the motor proteins that impair function could be listened to, to see if there was a change in the humming of the motor,’ she says. McConnell notes, however, that this is only possible if the vibrations are powerful enough to be noticeable above the background Brownian noise.

Another limitation is the size of the nanoparticle, says Ricardo Arias-Gonz?lez, who leads the optical manipulation lab at the Madrid Institute of Advanced Studies in Nanoscience in Spain. Arias-Gonz?lez suspects that molecular motors may be out of earshot but that the nanoear could listen to processes that involve many proteins working together. ’It is highly innovative,’ he says. ’I would find it quite exciting characterising the noises in the vicinity of an individual cell. This might provide information on collective tasks that may not be easy to inspect with microscopy.’