Scientists at the University of California-Los Angeles (UCLA) have signed a deal with a private investment firm to develop and market ’nanomachines’ to treat cancer. The mechanised nanoparticles include tiny valves and impellers to help release chemotherapy drugs exactly where they are needed - reducing their side-effects and boosting the effectiveness of the treatments.

Developing a new drug usually takes about a decade from conception to market, but the research team hope to move much faster because their system uses drugs that have already been approved by the US Food and Drug Administration. The first treatments could be ready for clinical trials in as little as three years, they say.

The deal grants NanoPacific Holdings exclusive access to key developments at the UCLA California NanoSystems Institute’s (CNSI) Nano Machine Center, a large cross-disciplinary research group focusing on the targeted delivery of active substances. The centre is directed by four professors with expertise in different fields. The partnership aims to transform their cutting-edge research into commercial therapies.

Current chemotherapy drugs target all rapidly dividing cells - indiscriminately killing both cancerous and healthy cells. Delivering the drugs selectively to where they are needed could allow much smaller amounts to be administered to patients - perhaps cutting the dose hundreds or even thousands of times. The group plan to achieve this by packaging drugs inside honeycomb-like nanostructures. The structures include tiny ’nanovalves’ that can be opened and closed, releasing the drug molecules precisely where they are needed. Depending on the type of cancer being treated, different methods can be used to trigger the release[1,2].

’One way this could work, for example, is if a tumour is near to the surface of the skin,’ Fraser Stoddart, who pioneered the design and synthesis of these molecular machines, told Chemistry World. ’We could shine light of a specific wavelength through the skin that would trigger the nanovalves to open and release the drug.’ 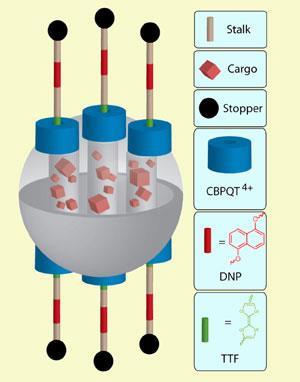 Jeffrey Zink, co-director of the centre, explains: ’There are a variety of ways we can power these nanomachines. Light can be used to generate an electron which drives the moving part, but we can also use a chemical trigger to do this, for example using a reducing agent to produce an electron.’

The team have also developed ’impeller’ molecules to waft drug molecules out of the nanoparticles. ’This is where we put molecules such as azobenzenes inside the honeycomb structure,’ continued Zink. ’When exposed to light they "waggle" around, causing the drug molecules to be pushed out.’ [3]

The scientists are also looking at other ways to trigger the release of drugs for more deep-seated tumours. ’The key processes we are exploring use enzymes and pH differences found in the local area of cancer cells,’ Stoddart explained. ’We are confident that we can use these mechanisms to seek out cancer cells and release the drugs in the right place.’

But the technology could also provide access to new and powerful cancer therapies. For example - the researchers have already shown that mechanised nanoparticles can be used to deliver previously unusable treatments such as camptothecin - a hydrophobic cancer drug that is difficult to administer due to its poor solubility in blood[4]. Furthermore, the nanomachines could allow drugs that were previously thought to be too toxic to be used safely.

As well as Stoddart and Zink, the team includes Fuyu Tamanoi, a professor of microbiology and director of the centre’s signal transduction programme, who is working on new ways of triggering drug release; and Andre Nel, chief of the CNSI’s nanomedicine division, who specialises in the toxicity of nanoparticles inside the body.

"While all new targeted nano cancer treatments will need to undergo full trials before entering the marketplace, partnerships like this will help to move nanotechnology from the laboratory to practical applications" - Andrew Maynard

NanoPacific will also fund further research at the Nano Machine Center to investigate extending this technology to a broader range of applications. The scientists hope their molecular packaging system will find uses in areas including cosmetics, electronics or in the treatment of other conditions.

Andrew Maynard, chief science adviser at the US-based Project on Emerging Nanotechnologies, said that the partnership was a sign that nanotechnology is ’coming of age’. ’While all new targeted nano cancer treatments will need to undergo full trials before entering the marketplace, partnerships like this will help to move nanotechnology from the laboratory to practical applications,’ he said.

But Steffi Friedrichs, director of the Nanotechnology Industries Association in Cambridge, UK warned that ’it would be wrong to expect the overnight rise of miracle treatment’.