A new, highly sensitive nanoparticle detection technique could be used to quickly diagnose viral infections. The technique, developed by US researchers, can discriminate between different viruses and is sensitive enough to detect the presence of a single virus particle.

Rapid, sensitive techniques for detecting viruses and other pathogens save lives and help limit the spread of disease. In the past, scientists have used labelling techniques and sensors that are difficult and costly to fabricate to try to identify pathogens. Selim ?nl? and colleagues at Boston University, Massachusetts have now developed a low-cost, label-free detection platform using silicon. 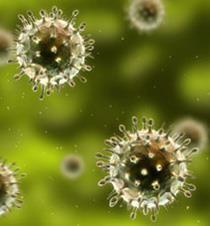 ’The resonators people fabricate are quite delicate and require very specific fabrication steps,’ says ?nl?. ’In our case, it’s just plain old silicon with thermal oxidation.’ The team used a silicon wafer to create the smooth, flat surface needed to make high-precision measurements and demonstrated their technique by detecting tiny polystyrene beads and H1N1 (flu) viruses, which are around 100nm in diameter.

When a virus is bound to the surface, by an antibody specific to that virus, it produces an optical signature due to interference - the delay in light interacting with the particle. The team is also able to discriminate between particles of different sizes, down to 70nm, helping them to ignore noise from smaller particles such as proteins present in serum or saliva samples.

A key advantage of the team’s technology is the size of sensor they are using. Most single pathogen detection techniques use very small sensors, but as ?nl? explains, this means they will have a hard time finding a virus. ’The advantage we have is that we are doing this on a surface that is very large - hundreds of microns or even a millimetre,’ he says. ’So effectively, we have hundreds of thousands or a million sensors with single particle sensitivity. And that allows you to be very sensitive at low concentrations.’

Bob Carr, co-founder of nanoparticle imaging company NanoSight, based in Amesbury, UK, says the technique looks intriguing, although currently limited to immobilised particles. He’s particularly interested by the team’s suggestion that they could exploit the sensitivity of particles to different polarisations of light to look at shape. ’The shape of such small particles is usually invisible,’ he says. ’So if they can crack that then it’ll be a real head-turner.’

?nl? says the approach could be used to detect any virus as long as there are antibodies available. His team is already starting work with hemorrhagic fevers including Ebola and Marburg.